I think I’ve recovered reasonably well from my long run on Monday. I ended up with a total of 44 km for the day. I intend to do another fast lap of Centennial Park, either tomorrow or Friday, so that will give me a much better sense of my recovery.

With the long run to start the week, I should still crack the 100 km mark for this week, but next week I’ll be reducing my mileage quite dramatically. I don’t want to go into a 32 km race feeling fatigued and over trained. The fact that I will pass 1,000 km for the year by this weekend is a hint at the possibility of being overdone, particularly as it has been quite a high quality couple of months. An easy week leading into the race should ensure I recover adequately.

This is a photo of me applying lip protection in the Californian desert during the world run. This, along with sun block for other parts of my exposed skin, were a necessity when running in such locations and conditions. 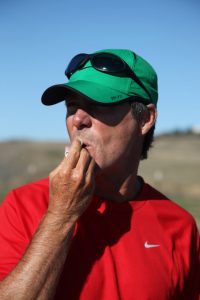 And stay tuned in regard to the RWVQ (red wine value quotient). I have had several suggestions from readers, all red wine afficionados in their own right, and I am attempting to incorporate their views in the RWVQ. I expect to have a refined version in the coming days.

PS I had the pleasure of catching up with an old friend last night, Peter Mensah. Peter is an actor, currrently living in Hollywood, and has had roles in several movies and TV series, including Tears of the Sun, 300, Spartacus, True Blood, and Avatar. His star is on the rise, so keep an eye out for him in these and other productions in times to come.