I’m currently on King Island, resting up for tomorrow’s race. As mentioned, I’ve been given a handicap of 35 minutes. I’ve now lost more than 6 kg since the beginning of February, so I might do better than I expected.

The back marker, who recently ran  30 minutes for 10 km, is off 90 minutes. He’ll need to average close to two minutes per kilometre faster than me if he is to catch me. Let’s see what happens. I’ll send out a tweet after finishing tomorrow. That tweet will show up on the web site as well.

Another of Carmel’s creative photos below – this one taken in Arizona, a day’s run north of Phoenix. I’d just stopped for the day and we spied this bit of mirror hanging on the fence post, so Carmel thought she’d take this photo. 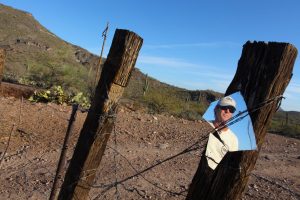