I really enjoyed the King Island Imperial 20 race yesterday. The handicapping concept adds a lot of interest and, combined with the picturesque course, the excellent organisation, and the welcoming local community, I’d recommend the race to anyone.

As it turned out, I placed 2nd on handicap, although I was 6th fastest over the line in a time of 2:30:10. I also won my age group. I was really pleased with my time. It was much faster than I expected. I haven’t done a sustained run where I averaged under 5:45 per km for nearly a year now, so I really didn’t expect my average of 4:41 per km for the 32 km hilly course, particularly when I’m still a few kilograms above my ideal racing weight. It augurs well for later in the year if I train well leading up to the Race in the Simpson Desert.

Here’s a broader shot of the mirror photo Carmel took in Arizona, just north of Phoenix. It was taken right around this time of the year too – March 16 from memory. The photo also highlights the thing this region is synonymous with – the ubiquitous cacti in the background. 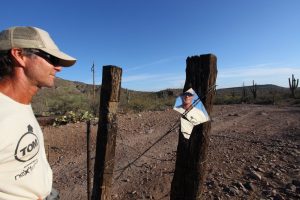 Last night we had a very enjoyable time in the Coyote Flats Bar and Cafe. This place is a classic, and is straight out of the movies. Tonight we’re in Wickenburg – another place with well-preserved wild-west buildings. And tomorrow we’re in Phoenix, where I’ll be catching up with an old friend, Walter.

It was back to winter today, but I quite enjoyed it. The extreme weather conditions further north managed to migrate down our way this morning, and the temperature was probably 15 C lower than yesterday. So, it was back into the cold weather gear – gloves, beanie, and all.

I’m not sure why, but I felt extremely good all day. It was one of the easiest days of running I’ve had for some time. I wish every day was such a breeze.

I headed up past the Lyon Airport, and across the Rhone River again. From there, it was up on to a plateau with lots of lakes that were formed during the last ice age, and on to my finish in the town of Villars les Dombes. I last passed through this town with Dave in 2007, on a bike, but it was a whirlwind visit on that occasion, lasting all of a few minutes. I will see a bit more of the town this time.