I’m now back from my cycling trip around the Mudgee and Gulgong region. I would normally have done a bit of a sprint session this morning, but thought the better of it after a minor crash on the bike on Saturday afternoon.

There had been a rain shower after a period of drought, which always makes for a very slippery road. And then, as I turned right at a round-about that was cambered badly the wrong way, I suddenly found myself sliding along the road on my elbow and hip. I lost a bit of skin here and there, but nothing too worrying. The main thing, however, was the bruising on the point of my elbow, and especially on the point of my femur near the hip. I can still run, but it’s quite sore, so I decided I’d take it easier today.

It will be another lower mileage week, as I have to go to Tasmania tomorrow for a couple of days of meetings, preventing me from doing too much running. However, I will certainly be out on the road for some running while I’m down there. I always love running in Tasmania.

Here’s a photo of me running down a hill toward the town of Avila in Spain. It’s an old walled town, but it’s hard to see the wall nowadays, with so much industry and residential suburbs set up around it. 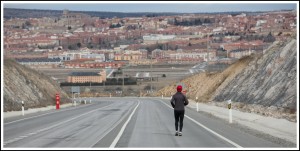 I am writing this blog after returning from a stunning dinner at Walter’s. A very big thank you to he and wife Nancy, along with Tania and Neng and the kids for a great evening – both for the company and the food.

I passed the accident – a car and an RV had collided and the RV had rolled. I ran on ahead for about 100 metres to the point where the police had stopped the traffic.A person had been killed. The Highway Patrol guys said the injured had been airlifted to hospital and the investigation was underway. They expected to re-open one lane “soon”.