Had a nice run around Launceston this morning, but not much else to report other than that. My sore hip is giving me no trouble at all now, so that’s pleasing.

Here’s another photo from Spain, this one as I ran past the impressive cathedral in the city of Burgos. Carmel and I have been to Burgos twice and loved the city both times. 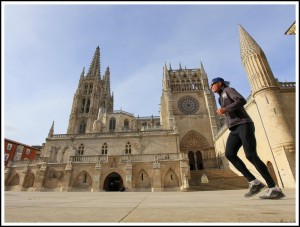 Lots of minor dramas today! After a steady but uneventful first 26 km, I was met by the support crew for a drinks replenishment stop. However, silly me put my phone on a post and forgot it when I headed off. I realised after 2 km, meaning I had to go back and do an extra 4 km in total which doesn’t count toward my world run.