I found the 400 metre sprints  quite tough, partly due to the short 100 metre recovery jogs in between each. My lungs were clearly not used to that pace, at least not over that distance. In contrast, I found the 1 km in 3:40 quite easy. That equates to a 400 m pace of 88 secs. The difference between that and a 75 second pace was quite stark.

Here’s a photo of me running across the border between Germany and the Czech Republic. This was once an Iron Curtain border. Now no-one stops you at all. There are lots of seedy inducements to German tourists to cross over – mainly gambling and brothels. However, these exist only for a few miles down the road. After that, the Czech Republic becomes a very normal and enjoyable country to visit. 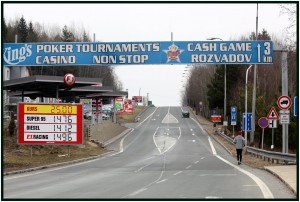 I chalked up my 9th country of the run today, but that was late in the day. Let’s back up a bit.

We had a very pleasant stay at Aux Berges du Doubs, the gite of Jipi (short for Jean Pierre). Both he and his permanent guest, Bertrand, provided great conversation last night over dinner, a calamari dish cooked by Jipi.

I started running this morning under unsettled skies, but there was no rain. The early part of the day was very flat, alongside the river. Later it got a little hillier, but nothing too extreme.

I did have one issue when I lost Google Maps for a period of time. I knew there was a path somewhere to my right, so, after heading through someone’s property, then trudging through a field that resulted in my shoes being thickly caked in mud, then making my way through brambles, and finally down a steep embankment through thorns and vines, I eventually reached a brilliant cycle path. Luckily, this led me straight to the town where Carmel was waiting for me.

After several more towns, I headed from France into Switzerland for a few kilometres. The border meanders its way around the countryside here, and the road I was on passed into, then out of Switzerland in the blink of an eye. It was strange, to be heading east in Switzerland, and coming upon the French border.

Carmel had more trouble with the accommodation, when her Garmin GPS tried to lead her up a narrow muddy path, where she surely would have gotten bogged. Luckily there was a sign that directed her to the correct road to the hotel.