I saw the movie Manchester-by-the-Sea today. It’s a very heavy film, but for me it had a different significance. It’s where I concluded my run across North America, having started in San Francisco many months earlier. I had run from Boston to Manchester that day, dipping my toe in the water to signify the end of the stage. The first harbour scene after the credits begin at the end of the movie shows exactly the spot where I dipped my toe in the water. It was quite nostalgic for me.

Tomorrow I’m heading to Mudgee for the Tour de Bois mini tour. Although I’ll be a bit light on the running for a few days, it will be compensated with cycling.

This photo is very topical, as it is five years to the day today since I reached the Grand Canyon on my run around the world. It was a surreal feeling knowing I’d run all the way there ….. well, at least from the Pacific Ocean. 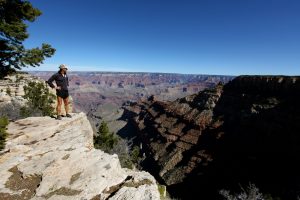