The degree of internal bleeding in my left calf is being highlighted at the moment as gravity causes the congealed blood in my calf muscle to slowly make its way down my leg. I’ve indicated in the photo below(with the blank speech bubble) where the actual tear has occurred – a Grade 3 tear (as bad as it gets) just below the back of the knee. The lower part of my leg is now a yellowish purple, even as far as my foot. It’s a natural part of the healing process, even if it does look a bit scary. 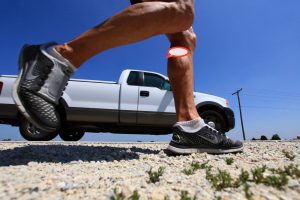 As for a photo from the world run, here’s another from Argentina. This is in the west of the country near San Luis. In fact, the Andes are only about 150 km in the background. This road was straight for more than 50 km and you could see the full length because it was concave, nullifying the effect of the curvature of the Earth. 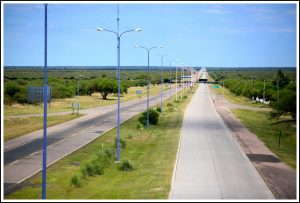 Today was about 20 C cooler than yesterday, and that suited me just fine.

PS We had a great time last night at The Naked Winery in Custer, where we met some really nice people.