I ran 25 km this morning, though a little slower than last week. But I did finish with a 4:54 final km. I’ll do another 5 km this afternoon, though very slowly. Some may wonder why I’d bother running very slowly. Isn’t it better to keep the quality higher and the distance lower?

Ordinarily that would be the case. If I was training for nothing longer than, say, a half marathon, I’d rarely bother with any running that wasn’t of a fairly high quality. But I want to stay well adapted for more journey running in the future. For example, when Serge Girard arrives in Sydney later this year to begin his Australian leg, I want to do a few days of running with him – around 70 km per day. I need my training to keep me within striking range of such distances. Adding slow kilometres at the end of the day is part of the strategy.

Below is a photo from my time running across Europe in early 2013. Scenes like this were a common theme throughout the months of February and March that year. In fact, this photo was taken in Germany almost exactly three years ago. 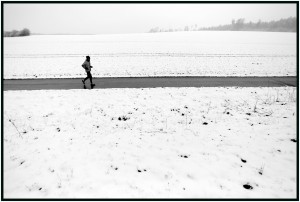 Well, I did reach a new record high elevation today, and pretty early on. I got to 2,284 metres, which is higher than anywhere in Australia, and only 350 metres lower than the Col du Galibier, the third highest pass in Europe. I’m pretty sure it’s downhill from here for a while, though.

But, first things first. I ran 5 km early this morning before taking a break to have a helicopter ride over the Grand Canyon. Once again, I will refrain from the superlatives, and simply say that anyone visiting here should take this ride. It is particularly exhilarating when the chopper approaches the canyon surreptitiously from low over the trees, and then it suddenly appears and the pilot drops the craft down into canyon, leaving your stomach up in your mouth.

From there it was straight back to where I left off running, and I completed another 34 or so kilometres of very enjoyable running, right along the south rim of the canyon. The whole way the Grand Canyon was just over to my left. When there weren’t stunning views, there were pleasant Ponderosa pines lining the road – a great forest run in itself, even if the canyon wasn’t there. There couldn’t be too many better single day runs in the world. Not sure why, but I was a bit faster than normal today, and feeling good.

Tomorrow I bid adieu to the Grand Canyon, and head toward Monument Valley. I expect to reach it before the end of the coming week.