I don’t usually write about anything other than running. But these are unusual times so I’ll diverge on this occasion.

When the coronavirus crisis is over, hopefully we’ll see some silver linings emerge. As they say, it’s an ill wind that blows no good.

One thing I’m pretty sure will occur is a change in our collective attitude and perspective. The forced isolation from our normal hectic lives, in which we interact intensively with others but often at a superficial level, will likely generate a new appreciation for what’s really important. I expect vast numbers of people will slow down their lives, enjoying the ‘little things’ more fully and, ultimately, recalibrating their work-life balance.

After all, the mandatory reduction in workload for huge numbers of people will give us the opportunity to think twice about how much of our lives we need to spend working. Maybe we can get by with less, yet be happier?

And the vital task of governments financially supporting their citizens through the crisis will likely provide us with a new way of thinking about the role of government itself. Yes, we’ll realise it’s OK to spend money and run deficits if it means that society as a whole is healthier, more cohesive, and generally better off – appropriate actions that deliver positive outcomes, rather than blind adherence to ideology.

Now back to running. Today’s photos and videos are from the region between the Grand Canyon and Monument Valley, and from Bavaria in Germany. It’s easy to tell which are which. The Arizona photos are mainly coloured red, and the Bavarian photos are white. I encountered a huge amount of snow in Germany, despite it being early spring. There’s a good photo of Carmel trying to get the snow and ice off the windscreen of the support vehicle one morning. That day was, perhaps, the coldest of the entire world run. 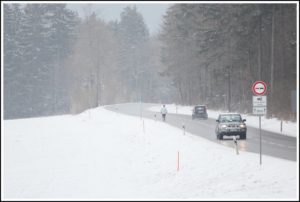