After totalling 130 km last week, I’ve started this new week with a bang, running 30 km this morning. And that included 5 x 1 km (average 3:38, fastest 3:33), with a 200 metre jog in between each. The combination of the speed and the distance made it a high quality session. And I can feel it a little in my legs now – a touch of soreness has crept in. I’ll probably doing a few more slow miles this afternoon to cap off the day.

The photo for the day was taken while I was running through France. I think this was in the southern French town of Uzes. Dave and I had cycled through the same town 18 months earlier. 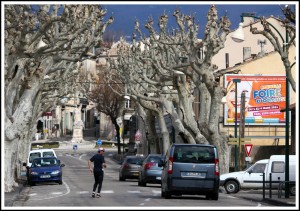 Another tough one today. Not sure why – perhaps I’m missing the resveritrol in the red wine that I can’t get on the Navajo Reservation. I felt low on energy and a bit sore in the legs. Hopefully tomorrow will be better.

A young Navajo woman stopped today and had a chat with me. She said she’d seen me on the road twice in the past two days, and decided to stop on the third occasion (I assume her work requires her to drive the length of the reservation on a daily basis). When I told her what I was doing, she gave me a donation – a nice touch.

While I have reached Monument Valley, I won’t get to the location of the Forrest Gump scene until mid morning tomorrow. However, there are still some great photos posted from today, so don’t miss them on the Home page.

I’m now in Utah; my third US state of the run. They will be coming thicker and faster from now on, after six weeks spent in California and Arizona. I expect to chalk up at least twenty states during the US leg of the run.

To finish, I received a message tonight from Jason, the ball boy from my days playing football for the Warilla Gorillas – we’re talking 30 years ago. It’s great to get messages of support from people I haven’t seen or heard from for years. Thanks Jason.

Today was very good for the most part, but with an awful section thrown in the middle. The first 22 km was on cycle paths, and I was enjoying the best of running in Germany. This was after visiting the Oxfam shop in Ulm this morning, and meeting Sieglinde, Leander, and Thomas – a nice start to the day.

Around noon I made the mistake of obeying Google Maps when it led me down a trail. Before I knew it, I was on a snow-covered tractor path. Tractors destroy dirt roads, as they leave huge deep tread marks, roughly the size of my feet. It’s like running over freshly plowed ground, and when it’s covered with snow, it’s like running over a plowed field in the dark – I simply didn’t know what was underneath. I was slipping, sliding, tripping, and stumbling, rolling ankles, and twisting knees, as I plodded through the snow. My feet had been dry until then – now they were soaking wet, and my shoes muddy. I had to endure 5 km of these slow and painful conditions, and ended up with sore hips, knees, ankles, and leg muscles.

Thankfully, the rest of the day was much more like the beginning, except that it started raining. At least it wasn’t too cold.

I’ve actually learned to run with a different style in the snow (when I’m on the bitumen). I slide, like a cross-country skiier, with no foot lift. At times, on the downhills, I reckon I can travel at close to sprinting pace, although it’s a bit scary at times – it doesn’t take much to lose control.

Now, to yesterday’s trivia question. There was only one correct answer, from Dave Dufour. Ulm is where Albert Einstein was born, and Princeton is where he died. I ran past Einstein’s home in Princeton, but his birth home in Ulm was destroyed by WWII bombs. However, that allowed me to run right over the top of where his place of birth used to stand, where there is now a memorial. Well done, Dave. I thought there’d be more people who knew that.