A couple of videos today will allow readers to understand the degree of snow running I had to do in Germany back in 2013. It was a tough time, but enjoyable all the same.

As for world runs, another started today. Dustin Johnson, a young American guy set off on his second attempt from the small Missouri town of Sikeston. He has already crossed into Kentucky. He’ll be attempting to set a few new records, including the fastest. You can follow Dustin on Share.Garmin.com/WorldRun. And Lootie will recommence her world run in the coming weeks, so it will be god to be able to follow two world runners.

Just when I thought the weather was as bad as it could get, it got worse. Today was colder, and the snow was heavier.

My feet were wet and cold from the very start of the day – there was nowhere to run except through six inch deep snow, either on the cycle tracks or on the road. However, once my feet were wet, it didn’t seem to matter when I continued to run through the snow. You can’t get wetter than wet.

The snow affected more than just my running today. Last night we needed to drive 3 km to dinner. We started out, but immediately turned back when the car was sliding all over the road. Luckily we had some supplies in the car, so dinner was baguette slices with avocado, tomato, cucumber, cheese, and ham.

All that said, I didn’t mind the day too much. It was only really bad when I had to jump off the road for cars, but that’s true of how I feel every day. However, it is worse in the snow, as I never know what sort of shoulder is under all that snow. It might be firm or soft, level or sloped, smooth or rocky. If I can get through days like this without capitulating, then the days of good weather should be a breeze.

This was the coldest day of the world run so far. There was a very cold day last year, into Prescott AZ, but I was unprepared then. Today I was prepared, and I still felt it. My Garmin thermometer registered negative temperatures all day long, despite me carrying it.

However, as they say about anger and grief, you can’t let it consume you, and this is also true in regard to cursing the weather. You just have to “let it go”. So, I now just laugh at the weather, or perhaps ‘with it’.

Running in Germany is a real dichotomy – if there is a cycle path, and there are lots of them, then running here is a joy – if there isn’t, then running is a nightmare. There’s no real in-between. German drivers seem to be nervous about anyone being anywhere near the road, even two metres off the road in the snow, which is where I try to be when cars come by. It takes away the enjoyment when I constantly have to jump into the snow, and still cop some abuse from drivers, despite trying to make life easier for them.  I’ll just have to try harder to find the cycle paths.

I finished the day in the town of Ulm. Last October, I ran through Princeton in New Jersey, and now I am in Ulm. Here’ a trivia question for readers, but please respond only if you know the answer, without having to Google it. What is the link between Princeton and Ulm? Please send answers via the web site, Facebook, or Twitter. I’ll announce the winner tomorrow.

Today was very good for the most part, but with an awful section thrown in the middle. The first 22 km was on cycle paths, and I was enjoying the best of running in Germany. This was after visiting the Oxfam shop in Ulm this morning, and meeting Sieglinde, Leander, and Thomas – a nice start to the day.

Around noon I made the mistake of obeying Google Maps when it led me down a trail. Before I knew it, I was on a snow-covered tractor path. Tractors destroy dirt roads, as they leave huge deep tread marks, roughly the size of my feet. It’s like running over freshly plowed ground, and when it’s covered with snow, it’s like running over a plowed field in the dark – I simply didn’t know what was underneath. I was slipping, sliding, tripping, and stumbling, rolling ankles, and twisting knees, as I plodded through the snow. My feet had been dry until then – now they were soaking wet, and my shoes muddy. I had to endure 5 km of these slow and painful conditions, and ended up with sore sore hips, knees, ankles, and leg muscles.

Thankfully, the rest of the day was much more like the beginning, except that it started raining. At least it wasn’t too cold.

I’ve actually learned to run with a different style in the snow (when I’m on the bitumen). I slide, like a cross-country skier, with no foot lift. At times, on the downhills, I reckon I can travel at close to sprinting pace, although it’s a bit scary at times – it doesn’t take much to lose control.

Now, to yesterday’s trivia question. There was only one correct answer, from Dave Dufour. Ulm is where Albert Einstein was born, and Princeton is where he died. I ran past Einstein’s home in Princeton, but his birth home in Ulm was destroyed by WWII bombs. However, that allowed me to run right over the top of where his place of birth used to stand, where there is now a memorial. Well done, Dave. I thought there’d be more people who knew that. 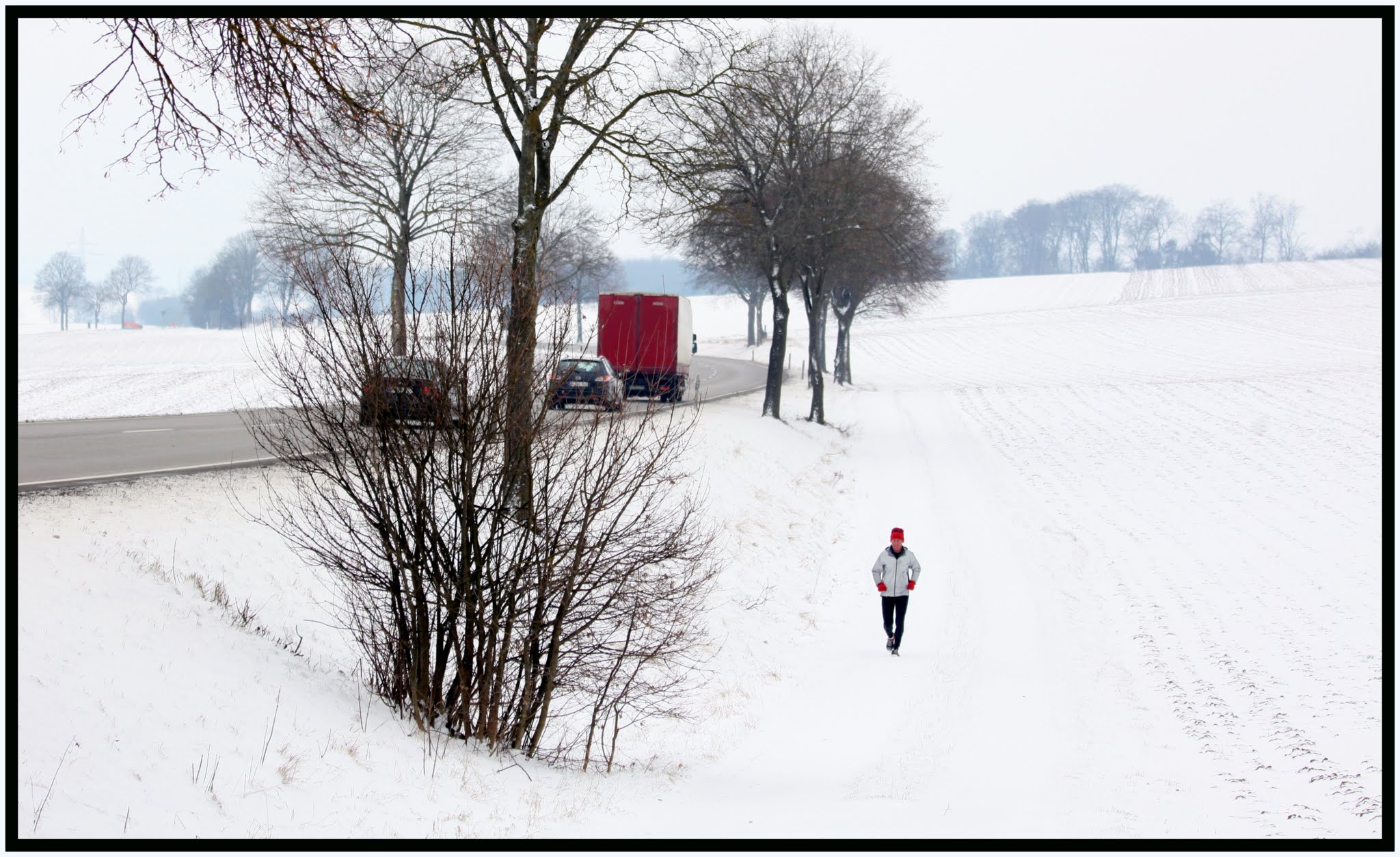 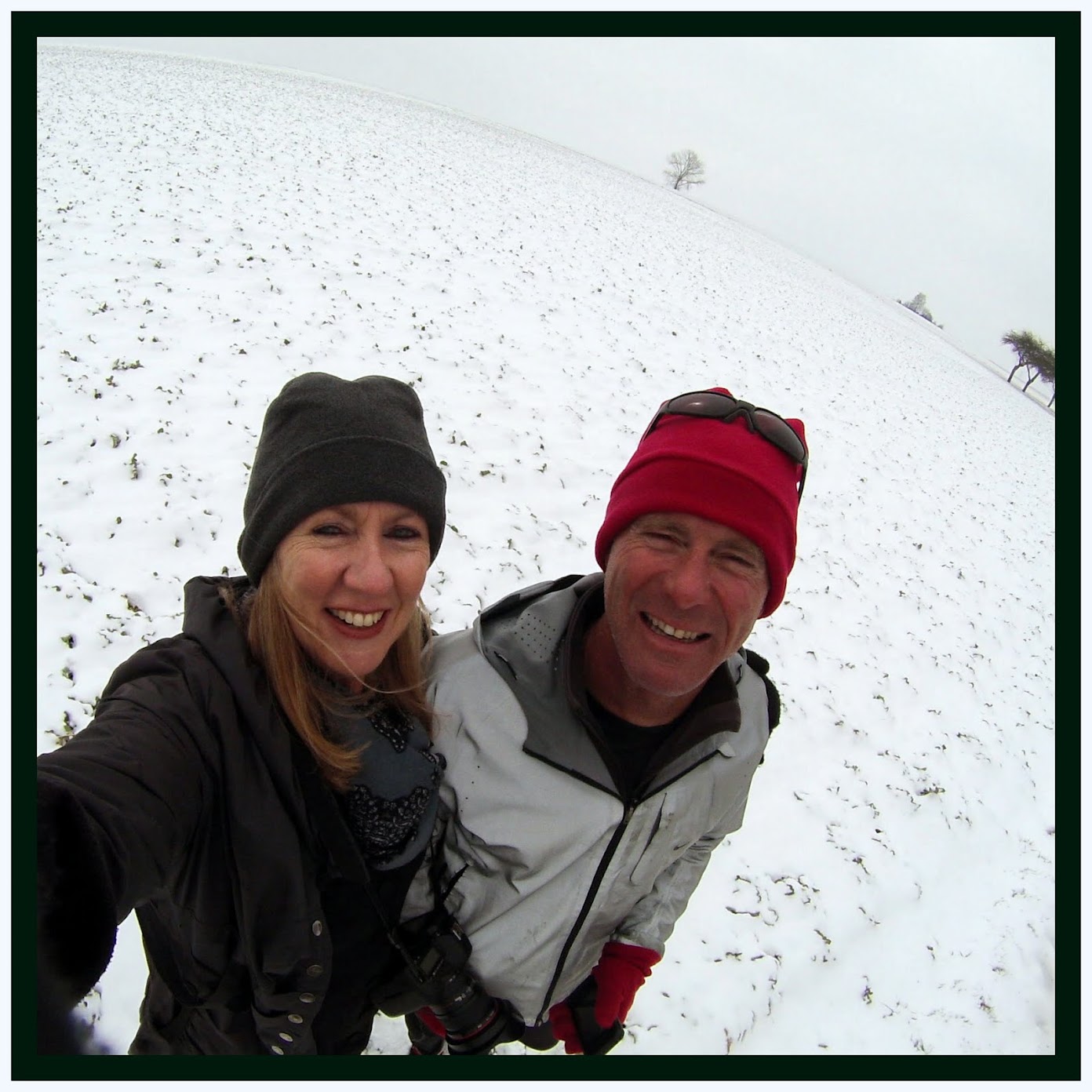 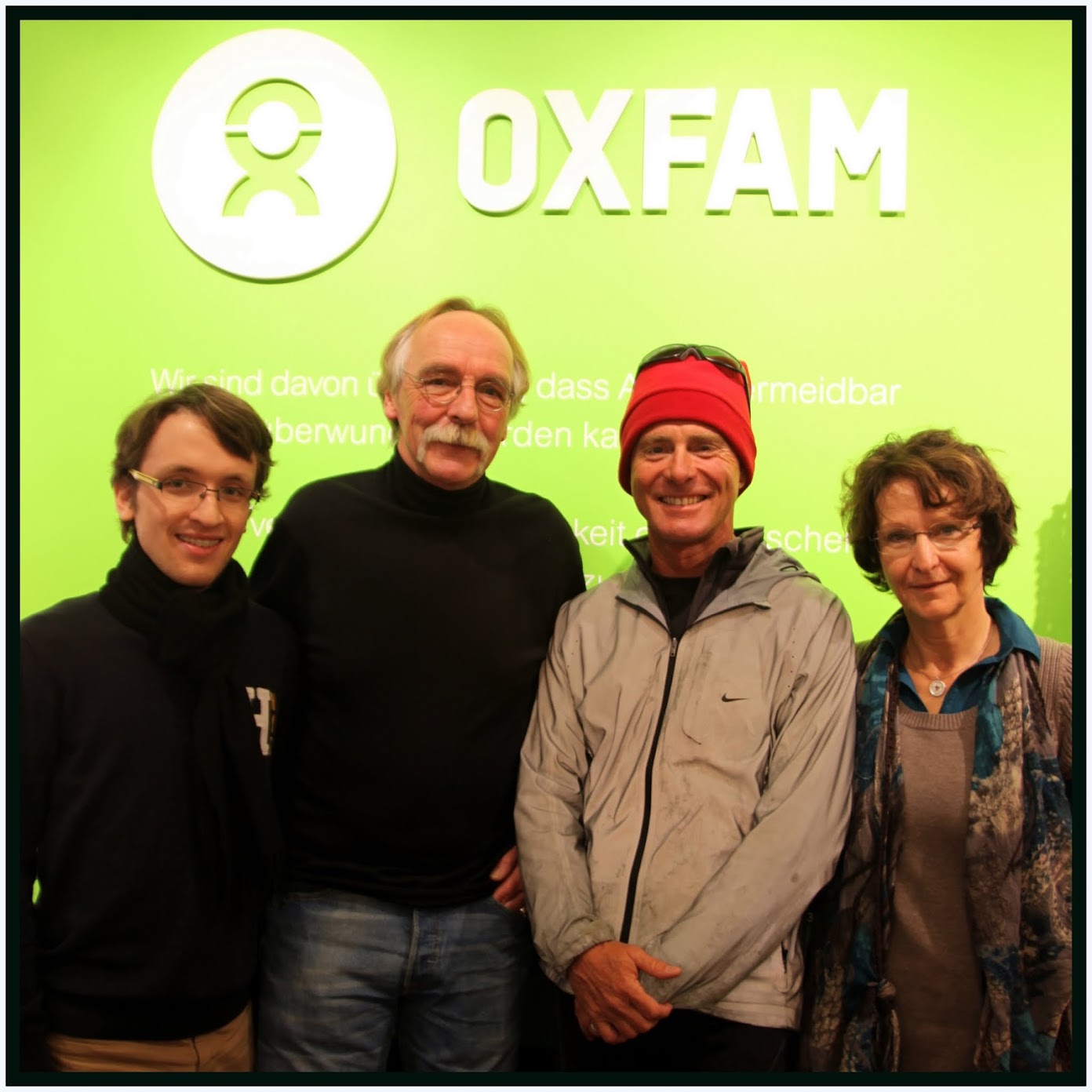