My calf is really coming along nicely now. I’ve made huge progress in the past two days, and I can now run virtually non-stop for 10 km or more. Until now the weakness in the new muscle fibres has caused fatigue after a relatively short distance, forcing me to stop for brief rests. Now it almost feels like it’s back to normal, although a true normal won’t be realised for another week or two yet.

My latest article for Azumio has now been published on their web site. You can read it by clicking on:

Here’s a photo from a back road in Argentina. At least that’s where I think it was taken. It’s not always easy to remember. Farm animals on the road were a common occurrence during my run around the world. 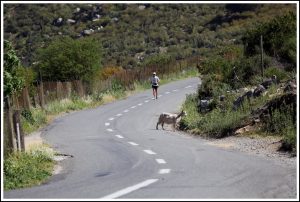 We will now be heading to Australia for the fourth and final continent. I will be starting in Perth on June 10, and expect to finish in Sydney around the middle of September. By the way, if anyone out there knows of a car that is free to be used from Perth for about a month, please let us know. We would need it from June 10, and it would be returned to Perth by July 5, as we will have a different support vehicle after that.