I’m back in the swing of things this week, with over 60 km run in the first three days. Feeling pretty good too. But, as I’ve mentioned already, I’ll be doing some international travel for work next week and the week after, so my running will suffer then. I’ll get right back into it, however, once I return. I will then have about ten weeks to get myself into top form for the Simpson Desert race.

It’s five years today since I run the classic part of Monument Valley, including the stretch of road shown in Forrest Gump. To commemorate the occasion here’s a photo of me running that same day five years ago. 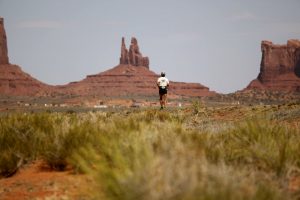 Runners may be interested in the following YouTube videos about an innovative new running shoe company. I’ve trialled these shoes and found them very interesting. I’m not quite sure they’re suited to me, but I reckon they’d be very suited to many runners. Anyhow, have a look and you can decide for yourself.

As you will see from the photos, we spent some time today at the location of the Forrest Gump scene. There will be a video to follow – sorry in advance for my corny acting, but you may get a laugh.

All that action took place in the morning, but the rest of the day involved scenery that was almost equally as stunning. In fact, it’s hard not to find another great view around every corner or over every rise. Whenever I think I’ve seen it all, something appears which amazes me again.

The town of Mexican Hat was interesting. Sitting above the town is a giant rock feature, which you’d swear was a Mexican sitting, wearing a poncho and sombrero. I also got my first view of the Colorado Rockies today, far off in the distance. It won’t be too long and I’ll be on the other side of the continental divide.

I only have 12 km to run tomorrow until I pass the 100 marathon mark of the run. That’ll be a nice milestone. Oh, and sorry again about the lack of tracker updates. My official position is at the corner of Highway 163 and the Bluff Airport Road.

No dramas today – just a nice run, mainly on cycle paths, and I even saw a bit of sun.

It was a quite a hilly day. Each town was in a valley, and there was a steep rise on its eastern side. There was also a lot of forest to run through. With the sun out during the morning, it was relatively warm in the open, but still quite cold in the shade created by the forests. The afternoon was flatter, and the sun disappeared as well.

It’s such a different day when I can run on the cycle paths, without worrying about cars.

Carmel is developing a lot of RSI in her wrist from all the downloading, culling, editing, & uploading of her photography. There are also numerous other computer related activities connected with the website, so we decided to have a photo-free day. She often has to cull up to 600 photos per day, which is causing a problem. Hopefully a rest will alleviate the problem somewhat.