As I thought might be the case, I was still fatigued from Monday’s long run – at least too fatigued to run a fast lap of Centennial Park. But it’s not until you actually have a crack at running fast for a sustained period that it’s noticeable. An everyday slow run doesn’t necessarily reveal the fatigue. Anyhow, I still did a lap of CP in 15:44 yesterday, but I could very much feel the tiredness in both my legs and body in general. That’s fine. It just means I need to concentrate even more on taking it easy before next week.

Speaking of the King Island 32 km next Sunday (Mar 12), the handicaps were published yesterday. I have been given a handicap of 35 minutes. That means some people will be starting as much as 35 minutes before me. However, there a a few starting quite a bit after me as well. It will be very interesting to compete in a race like this. I’ve never done so before. Perhaps the whole field will hit the finishing straight together. Stay tuned.

Here’s a photo with an interesting side light. This was taken in the small New Mexico town of Madrid, roughly half way between Albuquerque and Santa Fe. It was a delightfully quirky little town. But there was more to it. The movie Wild Hogs, with John Travolta, William H Macy, Martin Lawrence, and Tim Allen, featured the town quite heavily. In fact, the building you can see me running past at the moment this photo was taken, is the restaurant/bar where the four guys ate while trying to act like tough bikies. If you haven’t seen the movie (and I hadn’t until I heard about the movie being filmed there) then you won’t have any idea what I’m talking about. 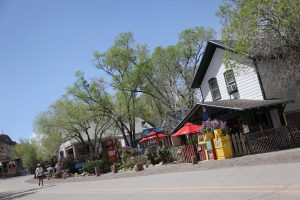 At nearly 69 km, it was a long run, but was made all the harder by a strong headwind for most of the day. I also had a couple of bum steers, where the road I was on petered out into a dirt track. But that just makes the day more interesting.