Despite a pretty easy weekend of running, I still felt fatigued this morning. Luckily I have an easy week planned, leading up to the King Island race on Sunday. I’ll be keeping it short and without much intensity. It’s always better going into a race a little underdone than overdone.

The photo below shows me running along the highway between Malibu and Los Angeles. I reached LA by the end of the day. It’s actually not that far from where this photo was taken. The city’s suburbs don’t encroach too far in this direction (west), though they do in the other three directions, particularly to the south and east. It took me two days to run out of LA to the east. 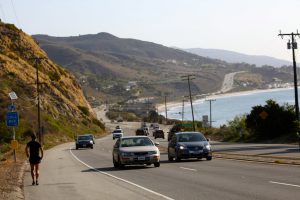 Like yesterday, it rained all day today, but at least there was no wind and the temperatures were higher. It wasn’t such a bad day, although I’m looking forward to some drier weather.

I passed though several towns and villages, on my way out of the southern Central Massif region and into western Provence. One town was St Hippolyte du Fort, where I had my bike repaired 18 months ago. The same guy was working in the shop.

I also passed through the medieval village of Sauve, with buildings that looked so old, it’s amazing they’re still standing. They knew something about building structures in those days.

On the way, I passed the two-thirds milestone. Just one-third of the run to go now.

I finished in Mauressargues, at the same B&B we stayed at in 2011 with Jenny, Jo, and Dave. By the way, Jo and Dave are joining us in about five weeks time for a couple of weeks in the support crew. So are The Hud and Sue. You may recall that the Hud ran with me on the first day of this run, from the Sydney Opera House. He also got a big mention in the blog about a year ago, when a new running distance  of 167.7 km was named a “Hud”. And Jenny travelled with us from San Francisco to Phoenix last year.

We are staying with our lovely hosts, Florence and Vincent. I’ll report more on our evening in tomorrow’s blog.