I upped the intensity of the speed work this morning (although it was still far from a quality session). I ran 4 x 200 metre, averaging 35.5 secs (fastest, 34 secs), with a 100 metre jog in between each sprint. My leg muscles felt quite good, but my lungs suffered a little toward the end, given the very short recovery time between efforts. It’s still a long way short of ‘good’, but it’s a start.

I also added a little running late yesterday, finalising my weekly total at 140 km. I’ve only run that far in a week twice since the world run, and that was the week before (150 km) and the week of (174 km) the Icarus Ultra.

Here’s another desert running photo. I can’t recall exactly where this was taken, but I think it was in the California desert near the Salton Sea and Glamis Dunes. Then again, I could be wrong. Desert landscapes can be hard to tell apart. If it was shot there, then it’s appropriate, as it would have been taken on this very day, March 7, in 2012. 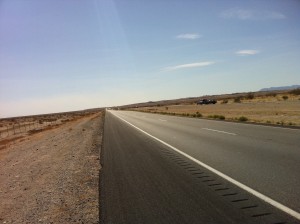 The highlight was undoubtedly the Imperial Sand Dunes. This is a stretch of dunes about 10 km wide that look like pictures of the Sahara Desert. The locals spend a lot of time on them over the weekends in dune buggys. You’ll see what I mean if you look at the photos and the video. And on that count, Carmel has discovered a program which takes the bumpy running motion out of the videos, so you won’t get so giddy watching it now.

At the 36 km mark I reached the site where Todor and Joe were conducting their experiments in the dunes (see yesterday’s blog for more explanation). As agreed, they’d left a gallon of water next to their car. I whistled hello and they both came up to talk with me. I continued on for a bit until they came past in the car, having finished their day in the sand. Todor got out (he’s the Australian) and ran with me for four km, to the town (if you can call it that) of Glamis, where Joe picked him up. It was great to have a bit of company for a while – I haven’t had any for quite some time now.

Finally, it was great to see the mighty South Sydney Rabbitohs kick off their NRL season with a thumping win over the Roosters (and they did so again yesterday – first game of 2016). Dave, who was at the game in Sydney, kept me updated throughout the morning as I ran. I’m looking forward to a successful season ahead.