My taper is going well, and I’m feeling a lot more energetic when running. I’m still encountering some residual heaviness in my legs, but I expect this to disappear over the coming four days, ahead of Sunday’s race on King Island. By the way, the record for the 32 km is held by Steve Moneghetti at 1:37. I’ll be at least an hour slower than that. But it’s a handicap race, so everyone – those faster and those slower than me (as well as me) – is a chance at winning.

This is a great photo taken by Carmel in Monument Valley. I was somewhere down below running while she and Libby visited this lookout. How could anyone not be enjoy running in a place like this. It is simply spectacular – one of the highlights of my run around the world. 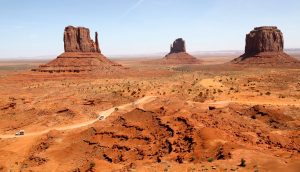 At this point, the clouds really started to clear, and all of sudden, the Giant of Provence stood in front of me. For those unfamiliar with the term, this is the name given to the long extinct stand-alone volcano of the region, Mont Ventoux. It is legendary on the Tour de France, and an impressive sight, rising up from the surrounding countryside. In 2011, I rode to the top of the mountain three times in one day, from the three different towns around its base – about 4,500 metres or 15,000 feet of climbing in a single day. I believe there are only about 4,000 people in the world who have ever done this, and I was quite chuffed at my achievement. I guess running around the world might top it, though, seeing as there’s only one person in the world so far who has done it, and two of us part way through at the moment.