I don’t normally worry about the time when I run, preferring whatever pace feels comfortable and not bothering with what the watch says. The one exception is when I do speed work. And I like to do courses from the past, as it’s an excellent way to compare your performances from week to week and year to year.

For that reason, over the next few months, as I prepare for the City to Surf and a possible attempt to ‘beat my age’, I will be using my speed work sessions as a means of comparison – to see how I’m improving each week, but also to gauge how I’m doing compared to last year, and even to years before that.

The signs for a reasonable C2S are good, particularly as it’s still only early May. If I’m to ‘beat my age’, past experience suggests I’ll still need to improve quite a bit yet, though.

Keeping with the Arizona theme, today’s photo is from just east of the Grand Canyon, on approach to the Painted Desert. A fantastic place to run, although a little lonely. 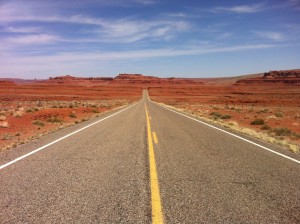 There have been a lot of comments recently about Barry’s running fashion. He’s been getting a bit of flak from those close to him, about the “daggyness” of his apparel, and now he has dragged me into it, with reference to my 1970s Greg Anning-style running shorts. I don’t think we’ve heard the end of this.