I’ve run 50 km in the first three days of this week, but will be toning it down now ahead of my next rugby game on Saturday. I’ve felt surprisingly good. Hopefully that will be the case after all the games.

For all those prospective race organisers out there, you may be interested in a company called Eventbrite, which provides event planning software for, among other things, race organisation. You can read more at

Eventbrite has also suggested that I write about one of my favourite races, to help inspire others to compete in and organise races. So I’ve decided to write about the 2009 Run to Sun. Read on.

I’ve competed in many running races over the years, some eliciting very positive experiences, and some not so positive. But perhaps the most memorable, for all sorts of reasons, was the 2009 Run to Sun on the Hawaiian island of Maui.

The Run to Sun is a race from sea level in the coastal town of Kahului to the top of the Haleakala volcano at over 10,000 feet (3,000 metres) in altitude. And, because of a one mile downhill section during the course, the actual elevation gain is well over 10,000 feet. It’s basically a 58 km race uphill, some of it very steep.

The race was my first international ultra-marathon and I’d trained hard for it. For months I’d averaged over 20 km in distance and 400 metres in elevation gain per day – lots of long uphill running.

I began the race well, and by half way I was in 4th place. Then the effects of altitude starting to kick in. I was one of the only people in the race who didn’t live at or have access to nearby mountains for altitude training. I began to suffer. And then the weather took a turn for the worse. Despite a balmy 25 C at the bottom, the temperature near the top of the volcano dropped to minus 18 C with the wind chill factor. I was wearing just a T-shirt and shorts.

I began to suffer from both the altitude and the cold, shivering uncontrollably. I felt like I was going to pass out, but knew that if I did, I might die. I forced myself to carry on. My support crew (and everyone else’s) were banned by the police from driving up to their athletes because of ice and snow on the roads. We were forced to fend for ourselves.

I finally reached the end in 9th place and was ushered off into a van to be warmed up. It took more than an hour before I could speak. Despite the drama, it was a race I enjoyed immensely. I would love to do the Run to the Sun again, but the authorities banned the race after that episode. They deemed it as simply too dangerous to the runners and the public. But at least I got to run the last ever Run to the Sun – unless, that is, the organisers one day manage to resurrect one of the world’s greatest races.

To finish, here’s another photo of me (taken by Carmel) running in the Andes during my world run. There’s not much in the way of vegetation up there. I was well above the tree line when this photo was taken. 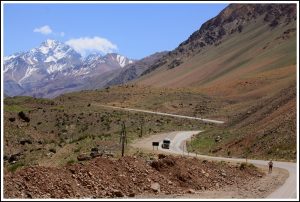