The past few Thursdays I’ve run a timed 1 km at a fast pace. I didn’t want to get stuck in too much of routine, so yesterday I decided to do a bit of a different speed session. I ran 13 km, with the last 100 metres of each kilometre at a much faster pace. With my Garmin watch telling me my average pace, I could see the average time per kilometre coming down after each fast section. It was a new way of doing speed work for me, providing something novel to keep me interested.

Just a quick reminder about my fund raising page for the Big Red Run. There’s a minimum I must raise before I’m allowed to compete in the event, so please consider making a small donation to help research into juvenile diabetes. You can do so via the following link:

This is a bleak photo. It was taken near Prescott, Arizona on my world run. I wasn’t prepared for the sudden snow storm, spending much of the day feeling freezing cold. You can probably imagine how it feels to be out in this sort of weather all day long with wet and frozen feet. 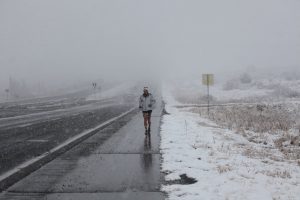