These past two days I’ve again forced myself to take it easy in my runs, and for two reasons. I want to ensure I don’t overdo it and get injured, and I also want to concentrate on more quality on my hard days. Over the past few years I’ve tended to run as far as I could every day, as I prepared for my run around the world.

Lots of long slow running worked for a world run, but it doesn’t really work for shorter faster races. I need to now back off the quantity in favour of a few high quality days each week, interspersed with easier days. Tomorrow will be one of those harder days – I’ll be doing another 3 km time trial, aiming to beat the 10:52 I ran a couple of weeks ago.

I’ve become aware of a very interesting new initiative. It’s called Running Heroes and encourages people to link their running with a phone or watch app or Garmin device in order to earn points for each kilometre you run. Once you build your points to certain levels you can redeem them for running products provided by the site’s partners. But don’t think you can cheat by logging miles on a bike or in a car – there is a sophisticated algorithm that weeds out that sort of thing.

If you’re interested, you can earn 100 free points by joining up and quoting a special code associated with this blog, valid to 30/05/15. Simply go to www.runningheroes.com.au and following the instructions below. By the way, I have no financial or any other interest in this – I’m just happy to promote it as an initiative that encourages people to get out there and be active.

To Redeem the offer, just follow these simple steps:

You need to connect your running app/watch to the Running Heroes website to start collecting points and to redeem the offers. There are also Facebook and Twitter options at @RunningHeroes and @RunningHeroesAU using the same promotional code.

Today’s world run photo is from Arizona again – a simple road sign six miles out from the desert town of Salome, where I met a former career roadie who had worked with many of the world’s biggest bands, including the Rolling Stones on several tours. Photos like this epitomise the sort of images I saw throughout each day in Arizona. 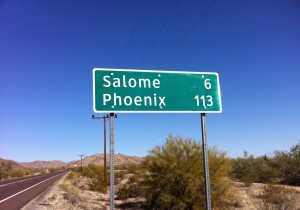 Today exhibited a contrast in weather conditions. It was hot and humid until early afternoon, but when a huge thunder and lightning storm hit, the temperature dropped to 13 C, with me shivering in wet clothes.

The running was along the D100, a very good road for this sort of activity. It is getting busier, however, as I get closer to Istanbul. I passed through the towns of Babaeski and Luleburgaz, which were both much bigger than I expected, the latter having a population of well over 100,000.

A policeman stopped me during the storm to enquire why I was running in such unfavourable conditions. I just told him that I keep going, no matter what. He seemed to accept this.

Carmel, Debbie, and Barry had a lot of trouble again finding a hotel for the night. We weren’t expecting it to be like that. They were eventually successful, with a much better hotel than last night. In fact, last night’s accommodation was probably the worst we’ve had on the entire world run. The power went out twice, power cords weren’t long enough to reach sockets or they didn’t have plugs, the walls were cracking with pieces flaking off, the showers overflowed with murky water, and to top it off, there was a wedding reception that went to 4 am, with very loud music shaking the building until then. Luckily I can sleep through just about anything, but the others really suffered. They have been tired all day.

Due to the storm, there was some trouble finding me this afternoon, so Barry only ended up running 7 km. His total is now up to 71 km. Will he reach his century by Istanbul?