This morning I ran a 3 km time trial in 10:39 (3:39, 3:35, 3:25; average of 3:33 per km). I felt quite comfortable throughout, only pushing over the last kilometre. I also had to run more than half of it into a stiff headwind, so I was pleased with the time. I didn’t run a 3 km time trial that fast last year until July 14, so I am effectively two months ahead of where I was then. That said, I reckon I’ll need to get the time down to at least 10:15, perhaps even faster, before I can have any real chance of beating my age in the City to Surf.

While keeping with the Arizona theme, I thought I’d post a different sort of photo today. This was taken in the town of Wenden, just down the road from yesterday’s Salome. The restaurant owner clearly has a unusual sense of humour. 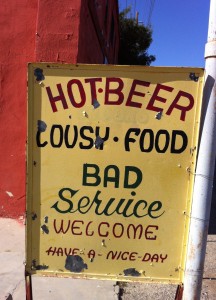 I was again on the D100, but it is getting more and more congested as I make my way closer to Istanbul. I passed through the city of Corlu, which I thought would be a nice peaceful town. Instead, it seemed its quarter million population was mostly out in the streets – it was a huge place that was totally abuzz.