I think I’ve seen the end of my short lived foray into rugby. While warming up for today’s game I tore my left calf, and quite badly. Although I’ve had bad hamstring tears before, this is the worst calf tear I’ve suffered.

I always knew it was the muscle tears that would be my nemesis playing a game like rugby. I wasn’t worried about the hits, but the tears of muscles and tendons are something you just can’t play through. It’s probably an indication that, at 55, and without having played in more than 33 years, I was never going to get away with it for very long.

Yes, I can recover and try for another comeback, but I know it will just happen again. Maybe not the calf next time, but something will go. It’s probably best if I concentrate on my running. The explosive sprinting is just too difficult. Anyhow, at least I got to play in a game and experience the feeling once again. A very short return to the field, but better than nothing.

Back to running – here’s another photo from the Andes during my world run. This was taken on the Chilean side at about 3,300 metres altitude as I was ascending to the top of the Cristo Redentor Pass. This is the dirt road that pedestrians and cyclists have to use. Other traffic drives through the tunnel about 1,000 feet further down the mountain. Snow melt soon turned this dirt road into a bog. You can just see me as a speck in the distance down the road. 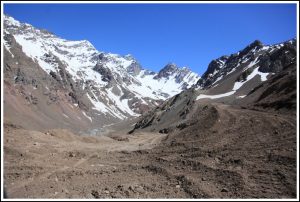