I ran 130 km last week – my biggest week of running this year. In fact, it was the biggest since last August, and it was a high quality week too. The consequence of such a big week is that I’m now quite tired. And I have a 50 km run coming up on Friday. I think I’ll take it pretty easy until then. I’ve been running much faster that I will be in the Big Red Run, yet there’s no real need to do so. A few slow and easy days won’t hurt.

I stumbled upon this link to a French web site featuring the Nullarbor stage of my world run. It was put together by Carmel, and has somehow found its way on to the site below. Have a look, although you’ll need to sit through ten seconds of ads at the start. I reckon it will be worth it. Tony Mangan liked it so much, he put it on his site. Tony is about to start the Nullarbor on his world walk, so the video will prime him for the next month or so.

Yes, the photo below is from the real South Park. This is in Colorado, not far from the town of Fairplay, which is supposed to be the inspiration for the South Park cartoon series. It’s all part of South Park County, and pictures of the four boys abound throughout. 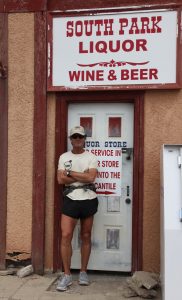 After a couple of kilometres I passed from Wyoming into Nebraska. This is my seventh US state so far on the world run. It’s quite flat, with lots of nice farming land dotted amongst the prairies.

I saw and smelled the ocean today for the first time in four months. I had run about 13 km when I crested a hill, and there before me was the Sea of Marmaras. It’s not very big on a world scale, but it still counts as a sea. In fact, you can’t see the other side, so it looks just like the Pacific or any other large ocean.

The second half of the day was spent running close to the sea or, in some cases, right alongside it. The Turks obviously value the real estate along the sea shore, as it is a non-stop strip of shops and residential buildings.

Barry ran the last 15 km with me today, which bring him up to 86 km in total. Will he manage 14 km tomorrow, on my final leg into Istanbul?

Happy birthday to Libby when she awakes in a few hours in Sydney. Last year we celebrated her birthday in Nebraska. Wow, it really doesn’t seem a whole year ago.

PS The Garmin was somehow turned off today, and missed 5.12 km of the run, calculated via Google Earth. I have added this missing distance back into the stats, giving a total of 49.90 km for the day.

PPS Now, this is what a world run is all about. I am here on the seventh floor of our hotel, enjoying an Efes beer, while watching the sun set over the Sea of Marmaras and listening to the exotic sound of a wailer calling the local people to prayer from the minaret of a nearby mosque.