After a single slower day yesterday, I felt a lot more energetic this morning. And that’s despite having run 31 km on Monday and 20 km yesterday. Admittedly, yesterday was a fair bit slower.

So that’s very encouraging, but I won’t be going nuts. I still ran a bit slower this morning, and will do so tomorrow as well, prior to a 50 km run on Friday. That will be my first 50 km or more since last August.

This is another photo from South Park, Colorado, during the world run. It’s actually part of the town of Fairplay. As mentioned in the last post, there are lots of pictures of the four South Park boys abounding throughout town. 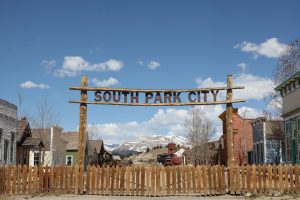