I was a bit silly yesterday, carrying an old 45 kg (100 lb) TV out to the road to be picked up in a council clean up. It wasn’t so much the weight as the awkwardness of carrying it. I got about half way down the side passage and felt my back go. It was really painful yesterday, though a little better this morning. I wasn’t sure if I was even going to be able to run today. I thought I’d go out and test it, and after I warmed up it felt a lot better, but certainly not perfect. There was still a lot of stiffness and soreness, but not so bad that I couldn’t do a bit of the speed work I had planned for the day.

I didn’t want to push it too hard under the circumstances so I decided to limit my sprints to the shorter end of the spectrum. I ran my regular hill (which is 230 metres long at an 8% gradient), this time doing it three times at an average of 43.3 seconds. I was quicker last week on these same hills, but today I had no real rest in between each, simply jogging back down the hill and starting again. I then ran a 400 metre sprint in 69.4. Once again, this was slightly slower than last week, but I could very much feel the stiffness in my back and the lack of power generated through the left side of my pelvis. So it wasn’t too bad a session overall, considering.

Whenever I’ve strained my back in the past it has always come good within a day or two. I think I might attempt a short time trial on Wednesday, as on Thursday and Friday I’ll be cycling with my Tour de Bois mate, Big Andy, in the countryside. He is doing a major tour through the mountains of Europe in early June and needs some serious training. I’ll be keeping him company. I’ll probably do a long run in the country on Saturday.

Today’s photo moves into California. This was taken on the Big Sur stretch of coastline. The distances are in miles, so I was about 450 km from Los Angeles at the time. The Hearst Castle, by the way, is the amazing mansion built by William Randolph Hearst in the first half of the 1900s, and was visited by innumerable movie stars and politicians of the day. Carmel, Libby, and Jenny (the three woman support crew at the time) visited it on a day trip. I just ran past, viewing it up on the hill from my vantage point on the coastal road. 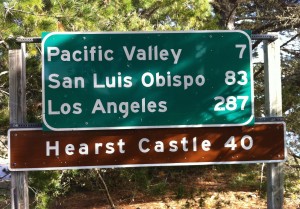