Later today I’ll be running from the northern suburbs of Wollongong to the Sutherland Relay for Life event at Sylvania. I’ve been asked by the organiser, the irascible Reefton Humblewood, to enter the stadium and do a few laps – a bit of an interlude for the thousands who walk and run around the track all day long, raising money for cancer research.

In 2008 I ran 100 km around the same track during the Relay for Life event – 250 laps in 8:45 (although I took a 41 minute lunch break with friends). In 2009 I used the Relay as the finishing point for my 1,000 km Melbourne to Sydney run. So, it will be good to be back, if only for a few laps at the track itself, although I’ll be running roughly a marathon to get there. I’m pretty confident my Achilles will hold up, so long as I stay on the roads and sidewalks.

On a different topic, I forgot to mention something that happened a couple of weeks ago. Carmel and I were staying in a motel in Braidwood with Carmel’s extended family as part of a weekend away. We were in Room 8. But let’s backtrack a little. In 1970 a movie about Ned Kelly was filmed in the Braidwood region – with Mick Jagger playing the part of Ned Kelly. As it turned out, the movie crew used the same motel as one of their accommodation options. And it was at this motel that Mick stayed. And guess which room was his – yes, Room 8. After staying in the same room as Somerset Maugham in an ancient chateau in Spain during the world run, we’re beginning to amass quite a collection of celebrity rooms – if you can call two a ‘collection’.

Today’s photo is from the South Island of New Zealand, just south of Oamaru. As you can see, it was a beautiful region in which to run. 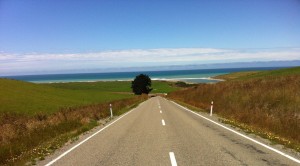 So, it’s been a full day, especially on the press level. I also passed the milestone of 4,000 km in the US today. Another couple of days and I’ll be past the 6,000 km mark in total.

PS Although he is safely tucked away in bed now, it’s a big happy 7th birthday to the Ty-Man.