After my successful 5 km time trial on Wednesday, I’ve spent the past couple of days cycling with Big Andy in the region around Berry, Kangaroo Valley, and Fitzroy Falls. Yesterday was particularly tough, with nearly 6,000 feet of climbing on the bike, some of it at around a 20% gradient. You can see the stats of the ride, including the dramatic vertical profile, on https://connect.garmin.com/activity/781181747.

I rode with Big Andy in January, when I was several kilos heavier and less fit. That was really hard, and I failed to keep up with Andy (the cycling machine) on that occasion. But this time I was able to keep with him on the long mountain climbs, and without any specific cycling training either. More confirmation that my fitness level is improving.

It’s only a little over a month now until my book is in the stores. Already one of the major Australian newspapers has indicated they intend to run a review of the book. That augurs well for the reception the book is likely receive in general, although book reviews can be critical as well as positive. I hope it’s the latter.

Today’s photo is of fields of strawberries on the California coast between Santa Cruz and Monterrey. The late afternoon sun is shining over the Pacific Ocean. 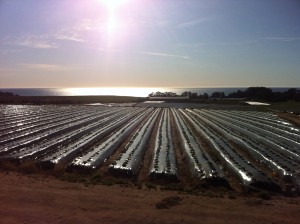 Running on a 33 C day may sound bad enough, but when you’re out in the direct sun, with heat radiating off the dark road surface, the effective temperature is over 40C. Add to that a dry wind and a lot of uphill, and it made for a difficult day.

As I ascended into the Black Hills, the girls, who had gone ahead, came back to tell me there was a herd of bison right by the roadside. Signs abounded, telling tourists that these animals are dangerous. And that was if you were in a car. I was a little concerned at first, but when I passed them, they were quite sedate and not interested in me at all. As a precaution, the girls were there in the car, should I have needed to be shielded behind it in case of an attack from a charging bull.