I am also a bit sore now, as Friday’s run included almost 1000 metres of downhill, and a similar amount of uphill too. However, the downhill was generally much steeper, and this has resulted in quite a bit of soreness in the quads. Not enough to stop me doing a reasonably good session today, though fairly slowly. But I will need to take it easier than normal this week.

This photo was taken in northern New Mexico during my world run, not too far from the border with Colorado. You can just see some of the mountains of the Rockies in the distance. There’s actually a town in the middle distance where we stayed that evening, though it’s in cloud shadow and a bit hard to make out. 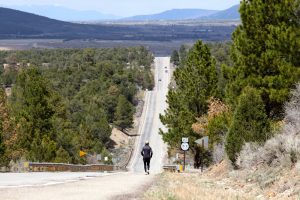 Running on a 33 C day may sound bad enough, but when you’re out in the direct sun, with heat radiating off the dark road surface, the effective temperature is over 40 C. Add to that a dry wind and a lot of uphill, and it made for a difficult day.