After cycling with Big Andy on Thursday, I enjoyed two long runs in and around Berry on Friday and Saturday. It’s always great to run somewhere different, specially somewhere as beautiful as the Berry region. One’s diet changes a bit too when away from home. I had a curried lentil and mushroom pie for lunch three days in a row – delicious!!! And I don’t eat all that much red meat, but on this occasion I had an eye fillet with bearnaise sauce and red wine jus on Thursday night, followed by the lamb shanks on sweet potato mash the next. Nice for a change.

Today’s photo is a little different. It’s of an artichoke field in California, taken on the day I ran through Monterrey and on to the town of Carmel. There were lots of Mexican workers in the fields, speaking in Spanish as I ran past. It was a really beautiful day of running. 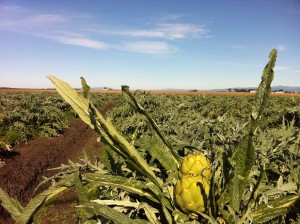 At the start of the day I met with a local television journalist, Derek, at Mount Rushmore. He did an interview with myself and Libby, and then some filming along the road as I descended the mountain. We’ll post a link as soon as that comes through. Mount Rushmore was impressive, and we observed an additional effect caused by the weather – the rain made it look like George Washington was crying.

The Garmin data, despite showing the correct distance, only has partial graphs today. This happened once before, and I have now worked out that I need to delete some old data on the watch to make way for the new.

I think I have failed to drink enough during the day. I’m working hard on rehydrating now. As I’ve mentioned in the past, the first day back after a week off, results in inexplicable soreness. My thighs, in particular, are very sore too. And that’s not all. The constant sweating soaked my shorts (and singlet), and this always ends up causing chafing – not from thigh on thigh, but from nylon on thigh. It is so bad that the chafing is weeping blood plasma.

So, I’m not in good shape. As anyone who has been to Singapore, Hong Kong, or other South-East Asian locations can attest, the humidity is intense. But try running 50 km in it.

Carmel was, again, a great support crew, but silly me declined the drinks she was offering me on many occasions. I won’t be declining tomorrow.