Last night I was looking through my log book from last year and noticed a speed work session I did on the corresponding Monday in 2014 (on that occasion it was May 26). The session consisted of: 3 x my regular 230 metre hill, with just a jog down the hill in between each sprint; a 1 km jog to the start of my 400 metre course; 2 x 400 metres with just a slow 100 metre jog in between; a 500 metre jog, followed by; a 1 km sprint.

The most pleasing part of today was that I ran good times for the 1 km and one mile, and quite comfortably, despite already being quite tired from the shorter earlier sprints. On Thursday I’m going to run Centennial Park again. Last year the best I could muster on that course was 14:00, just before the City to Surf. Let’s see how close I can get on Thursday.

Today I’m posting two photos from the world run. The first was taken on the Californian Big Sur coastal road, while the second was on the east coast of New Zealand’s South Island, just below Kaikoura. They are very similar, as was the run along the coast road near Stanwell Park, south of Sydney – all great roads on which to run. 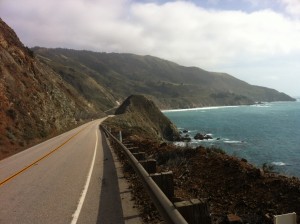 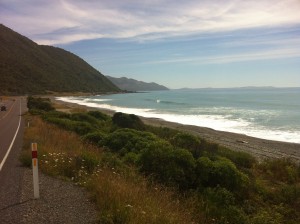 Both Carmel and I had interesting experiences on the road today. Earlier, I had come across a bunch of monkeys playing on the side of the road. They scattered when they saw me. I then almost stumbled into a Komodo dragon. It was more than two metres long, looked just like a huge goanna, and had an animal in its mouth – I think it was a baby monkey. It scurried down into a large culvert under the road.

A little later, Carmel went into what she thought was a market. It turned out to be a Malaysian wedding reception under a marquis. She was immediately taken to meet the bride and groom and had her photo taken with them, then taken to meet other guests, was asked to sit down and have the wedding meal with them, and finally left with the same gift that all the official guests received. What an amazing experience – beats running into monkeys and giant lizards.