As bad as this calf tear is, I’m actually quite comfortable dealing with it. Most injuries I incur are from overuse – too much running over a long period of time. When those sort of injuries come on, running can be a problem. After all, it was the running that caused it, so more running can hardly help.

With this latest tear, though, which was caused by an intense trauma from trying to accelerate and side step too rapidly, I’m finding that slow jogging is not aggravating it at all. In fact, it seems to be helping. Each day I can do more, and with less pain. It will still be another week or two before I can run unimpeded, but at least I’m making steady progress.

Today’s photo is from an outer Buenos Aires suburb. This was the morning after I’d been bitten by a dog. And later that day I finished at the Atlantic Ocean, thereby concluding my crossing of South America. 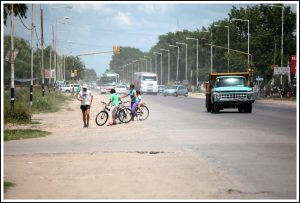