I forgot to mention in my last post that I ran a total of 145 km last week – my biggest week since August last year. However, given the intensity of the weekend’s running and cycling, I still don’t feel like I’ve recovered fully.

That has been exacerbated by having done a Pilates session on Monday. It’s the first time I’ve ever done anything like Pilates. I decided I needed to attain a better muscle balance, as I’ve been having some problems with my core strength. Hopefully it will help. Some parts of the Pilates was very easy, but other parts – where I using muscles I don’t use for running – were quite tough.

Another photo from the Rockies during my world run. Carmel loved taking photos of the snow capped mountains in the background, with me as a speck on the road. It helps to illustrate the scale of these mountains. 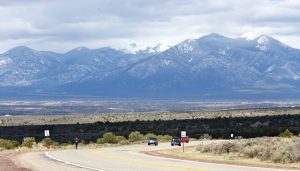