With my current schedule of two speed sessions per week, one longer hilly run, and the other three very easy, it’s tempting to go stir crazy. As I’ve mentioned previously, I feel I get better value out of my speed sessions if I’m reasonably well rested for them. The down side is taking it easy on the days in between – I feel good and want to go longer and faster, but it’s counterproductive to my overall plan of being at my best for the City to Surf in August.

So I’ve had two fairly relaxing days since Monday, but tomorrow is a time trial around Centennial Park. That will test me. I haven’t run under 14 minutes for the course since 2010. My last lap, three weeks ago, was done in 14:12. Could this be the occasion?

It’s now exactly four weeks until my book is in the stores. I should receive an advance copy in the next few days, which will be very exciting. I’ll post a picture of the cover of the book soon, so people will know what to look for in the book stores.

Today’s world run photo is of the Bixby Bridge on the Big Sur coast road of California. I had a very nice view out to sea as I crossed the bridge. 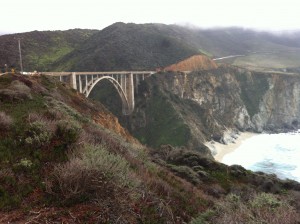