More good progress with my calf rehabilitation. I’m now able to run much further and faster (still fairly slow by most measures, though), and with less pain. Another two weeks should see me pretty much back to normal, although full strength in the calf may still be a month or two away.

Serge Girard continues to churn out 72 km days. Overnight (Sydney time) he ran through Las Vegas. Serge’s strategy is basically to run and sleep, with a bit of time set aside for eating. I’m not sure I could do it that way, but everyone is different and it’s up to the individual as to how they approach a world run. I always liked to stop and enjoy the towns, see the sites, and spend a bit of time meeting the locals in the restaurants and bars.

I viewed my world run as more of an adventure than an athletic challenge. But that’s just me. I’m sure plenty of people would prefer the way Serge is doing his run. It will be great to run with Serge for a few days in late September (at least that’s the current expected timing) and get his perspective in more detail. But I’ll have to get myself pretty fit if I’m to keep up with Serge’s regular days of 72 km.

The photo below shows me leaving Chile, just past the border check point. Or so it would seem. Actually, it takes another several kilometres before you’re out of Chile. Both Chile and Argentina have their border checks further down the mountain on their respective sides from the border itself, which is on the high point of the pass – the ridge that runs along the top of the Andes. It took me a few more hours before I reached the true border between the two countries. 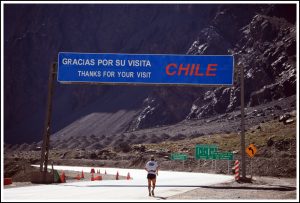 Another tough one today, due mainly due to soreness associated with the constant camber on the roads over the past couple of days. It was also a long day of 55 km, made even harder at the mental level by the long straight treeless roads. The last 31 km into town was along a dead straight line of tarmac.

I also ran through the Badlands National Park earlier in the day. This is an amazing region of eroded landforms, a little like a mini Grand Canyon. Apparently it used to be an ocean floor, and there are innumerous fossils of ancient sea creatures amongst the hills and spires.

Now, I have been reliably informed that the huge lizard I saw two days ago was a komodo dragon, the largest of the monitor lizards. I saw another today, although it was only about 1.5 metres long. There are plenty of dead ones along the road. I think they get creamed by cars at night.