I spilt a drink on my computer yesterday and it’s now cactus. So now I have to try to publish a post via my phone. It’s very cumbersome.

Anyhow, my running continues to be sluggish after last weekend’s big effort and the Pilates classes this week. I’ve already run over 100 km for the week so far, so that probably adds to the effect.

This photo below was taken in Bavaria during the world run. We had to scrape the ice and snow from the windscreen before Carmel could drive the car. It was minus 8 C that day. 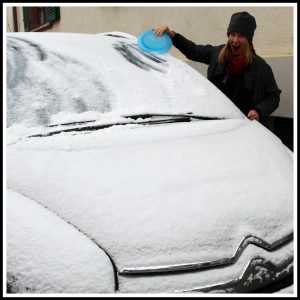