After a week totalling 110 km of running, I plan to do another very long run later this week – somewhere between 50 and 60 km. My one issue is an ache in my right hip/glute. I’ve had a similar thing twice before, both times caused by weak core muscles – and solved by strengthening that region. Hence, my taking up of Pilates classes last week.

However, that hasn’t cured the problem, at least not yet. It’s more annoying than anything, although it does create a noticeable weakness in my right leg. That’s not good long term, as it’s likely to manifest itself as a problem elsewhere.

To summarise – I’m working on it. If I can’t find a cure before the Big Red Run, I at least hope it doesn’t impact on my effort in the event.

Don’t forget to follow Tony Mangan on his walk around the world. Tony is currently on the Nullarbor, a region I know well. He recently completed the dead straight 146 km section to Caiguna, the second longest straight stretch of road in the world. The easiest way to follow Tony is via https://www.facebook.com/tony.mangan.14

When I passed through Ulm in Germany during my world run, I was keen to check out Einstein’s birthplace, which I knew was somewhere in the city. While standing around at a kebab stand thinking about it, I realised I was right there at the very spot – his birth home had been destroyed in WWII, but were are plaques commemorating the location next to the kebab stand. This piece of artwork was just nearby. That’s not blood emanating from the base – I think it was where someone had dropped a chocolate ice cream on the structure. 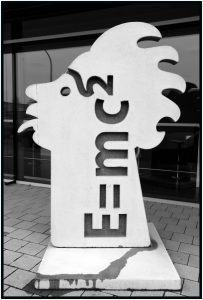 I have been running the past couple of days on the US16. This is another old highway that has been superseded by an interstate freeway. There has been almost no traffic, despite it being an excellent surface. I wish I could run on roads like this all the time.

We will now be heading to Australia for the fourth and final continent. I will be starting in Perth on June 10, and expect to finish in Sydney around the middle of September. By the way, if anyone out there knows of a car that is free to be used from Perth for about a month, please let us know. We would need it from June 10, and it would be returned to Perth by July 5, as we will be transported by a different means after that.

I will include some intermediate updates before I begin in Perth, so stay tuned to this space.