The last four days I’ve run around the northern suburbs of Wollongong, from Bulli, north to Stanwell Park and south as far as Corrimal. Much of that running was along the coastal cycle and walking path. The weather was perfect and the ocean was as calm as a millpond. It was a great change of scenery for me. Now I’m back in my regular environs. Training runs won’t be quite as interesting, but I must persevere – the Big Red Run starts on June 24. It’s not that far away.

For those who read this in time, if you watch Australian ABC TV tonight, you’ll see a story about my latest endeavour (a word of warning, though, it’s not about running). The story will be on Channel 24 at 8:30 pm on a program called The Business. It will be repeated on Channel 2 after 11 pm.

This photo is a bit different. It was taken in the bath (obviously) after one of my days on the world run. I usually had a bath if the motel room had one. Here I’m drinking my chocolate milkshake, and holding a rubber duck that Carmel bought as a bit of a joke. 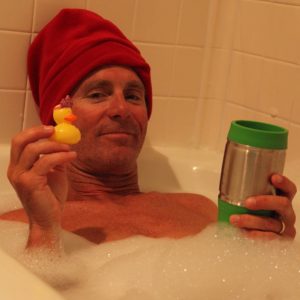