Last night I stayed in Palm Beach at my old mate Quinny’s, where I enjoyed a round of golf, a nice meal, and a little red wine (for those who’ve heard the name before, Quinny and wife, Sue, joined us on the world run for a week in South Australia). This excursion up north afforded me the opportunity of running in a different setting this morning. Last Saturday it was a long run in Berry, this Saturday it was 20 km around the hills of Palm Beach and Whale Beach. It was a thoroughly enjoyable experience to be in such a lovely location for a run, and the extra enthusiasm this created led to me running faster than normal without it seeming like a chore.

I’ll take it easy tomorrow before another speed session on Monday. Looking back over my running logs, some of my best years were when my speed work sessions entailed more repeats at a slightly slower pace than what I’ve been doing more recently, which is one or two repeats at a flat out pace. I think I’ll adopt this strategy again for a while.

So on Monday I’ll probably do eight or ten 400 metre repeats – a bit slower than the recent sub 70 second single efforts I’ve been putting in – with a slow 100 metre “rest” jog in between each. If I can average less than 80 seconds for each, I feel I’ll have done well. In years past I’ve twice run 25 x 400 metre sessions in under 75 seconds per repeat. But that was 25 years ago – I’m not up to that standard anymore.

I’ve had word that the advance copies of my book are in the mail and will arrive on Monday morning. I’ll take a photo of the book and put it on the next blog post so that people can see what to look for in the book stores. However, it won’t be available to the public in Australia until June 24. As for international readers, I’ll include information about availability as soon as I found out.

Today’s world run photo was taken on the Big Sur stretch of Californian coastline. These two girls were climbing a hill that I was descending and we stopped and talked for a bit. They were from Switzerland (I think) and were cycling from the southern tip of South America to the top of Alaska. It was always great to run into other “travellers” – something which happens fairly regularly when you’re running around the world. 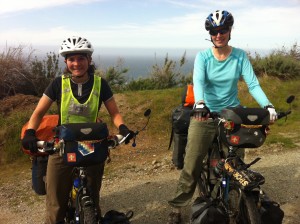 When I reached our motel, I was met by Nick from the Capital Journal newspaper, who conducted an interview. I also learned that the Days Inn Motel has provided us with a great rate, and an upgrade to a room with a jacuzzi – I can’t wait to sample it. Thanks Days Inn Pierre.