Pretty soon this calf injury will be just a memory and I won’t be talking about it. Before it does become history, though, I’d like to make the point that this is a very different calf injury to those I had around Christmas and the New Year. Those were minor strains in peripheral muscles low in the calf region, at the bottom of the much larger gastrocnemius. They were caused by running too far at a pace that was probably a little too quick at times. Such an injury is hard to ‘cure’ by doing more of what caused it in the first place.

This latest calf tear, however, was caused by an extreme attempt at acceleration, coupled with a change in direction. I’ve found that it has been possible for the injury to heal while running regularly and, at the same time, gradually increasing the distance and pace. This is because I’m not actually using that muscle very much when I run slowly. It’s obviously a muscle that’s primarily used for sudden acceleration. It was, by the way, the worst calf tear I’ve ever suffered, with lots of swelling and colour changes in my calf as the remnants of the internal bleeding ‘came to the surface’. But now it’s close to healed. I ran 17 km this morning with barely a whimper from the injury.

Here’s a photo with a difference. This is the dog bite I suffered in the outskirts of Buenos Aires. Funnily enough, the puncture marks are very close to where my current calf tear is located – just more at the back of the leg, rather than at the side where this bite is. 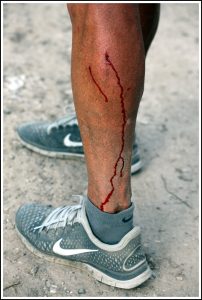 When I reached our motel, I was met by Nick from the Capital Journal, who conducted an interview. I also learned that the Days Inn Motel has provided us with a great rate, and an upgrade to a room with a jacuzzi – I can’t wait to sample it. Thanks Days Inn Pierre.