I’m not long finished a 53 km run, and it was tough. But not for the reason you might think. The reason was my right glute (official name, gluteus maximus), otherwise referred to as my arse cheek. I mentioned it on Monday. It’s been aching when I run, but it’s not an injury. It’s because the muscle is doing work it shouldn’t be doing, leading to it fatiguing and aching like your stomach muscles do when you do too many sit ups.

Anyhow, I’ve booked in to see a physio. I thought the Pilates classes might work, but they didn’t. I thought a deep tissue massage might work, but it didn’t. In fact, both those things made it worse. I’m now going to get professional advice, as the Big Red Run is only three weeks away. Having gotten through today’s run, I’m sure I could get through the BRR too, but I’d be much slower than I’m capable of, and I’d enjoy it much less due to the constant low level pain.

On another matter, when I got home I went to the toilet, only to find my wee was bright red. But don’t worry, it’s not what you think. It was the result of dehydration combined with having eaten a lot of baked beetroot last night. The same thing has happened to me before. The first time it scared the crap out of me, until I remembered the beetroot.

So, to the photo of the day – this one is from Germany during the world run, on one of the days it wasn’t snowing. As you can see, the road has no shoulder. That made it very difficult at times. Many German roads have cycle paths alongside, which was great. But when there wasn’t a cycle path, the running was more dangerous. 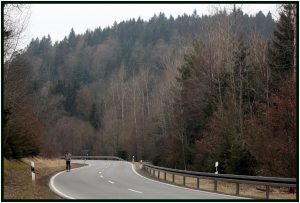 As I’ve said before, you just can’t pick ’em. After a strong run yesterday, I was expecting to be powering today, but I felt terrible during the morning, only picking up after about 2 pm.

Part of this was due to the fact I was running on a busy road with no shoulder. This is the worst type of road to run on. I was constantly jumping off the road surface on to the rough gravel to avoid cars. I just couldn’t find a rhythm.

However, after 30 km I reached the intersection of US14 and US83. After this, the traffic volume reduced dramatically, and the shoulder widened just as dramatically – bliss for a runner.

All the same, running on the constant camber facing the oncoming traffic has resulted in a sore right ankle. I’ll have to be careful to ensure this doesn’t escalate into anything more serious.

Today I crossed the 100 degree west meridian. There was a sign by the roadside signifying the fact. It also explained that, due to an incorrect report by surveyors in the early 1800s, that everything west of 100 degrees was a desert, banks would not lend to anyone wanting to settle beyond this imaginary line. It caused a lot of economic hardship in the Dakotas for quite some time.

Please note, the tracker is currently showing me about 27 km further east than my true run position.

And to finish, a very happy birthday to my daughter, Grace. Have a good one!