Patience is not one of my virtues. In fact, Carmel says I’m the most impatient person she knows. I just struggle sit around waiting for things to happen. But that’s exactly what one needs to do sometimes when it comes to running training. After a good speed session on Monday, I know the best thing to do is to take it easy for a couple of days. Particularly since I also did some skipping and bounding on Monday, and I’ve been warned that overdoing this sort of exercise can lead to injury more quickly than anything else.

So I’ve been doing less strenuous running since Monday, ensuring I recover adequately. Things are looking good at the moment, and the last thing I could handle is an injury. Tomorrow I should be fine to do another time trial, and I think I’ll do a lap of Centennial Park again. I’ll report on that tomorrow.

The book about my world run is now at the printers – nothing more for me to do. I know it won’t be viewed as perfect, but it feels satisfying knowing I wrote every word of the book – no ghost writers for me. We’ll soon see how well it sells. It’s still due in the book stores here in Australia on June 29.

Today’s photo from the world run was taken in California, between the towns of Lompoc and Solvang. These are west of Santa Barbara and near to the Vandenberg Air Force Base, an outpost of NASA with a space shuttle landing strip. The previous evening a story about my run had appeared on a local TV station. The guy taking my photo had seen the news segment and then spotted me the next day, so he stopped and got out his camera. So I stopped and took a photo of him taking a photo. 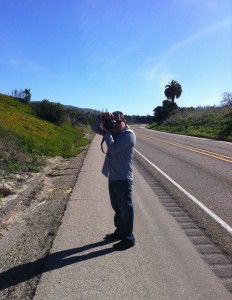 However, I did see some things of interest. At my lunch stop – a bison ranch – I saw a new born Shetland foal. It was only about as high as my knees – the smallest horse I’ve ever seen, by far.

The temperature only reached 27 C today, which made the running much easier. A cooling breeze helped even more.

The run out of Sofia, like any big city, was less than inspiring, but it didn’t take too long. Although I am probably not technically allowed, I ran for about 10 km on the freeway, as it provided me quite a sizable short-cut. No-one stopped me or gave any impression I was doing anything wrong, so maybe it is allowed.

PS I probably won’t get a Bulgarian SIM card, so I will just be updating the tracker via Wi-Fi at the end of each day while in Bulgaria. It will only be until the weekend.