As planned, I ran a lap of Centennial Park this morning. To put it in context, last year I ran the same course four times. The first was on June 5 in 14:45. Today, a full four weeks earlier in the year, I ran it in 14:12 (3:44 per km). In fact, I didn’t run that fast last year until July 7, and that was only two seconds better with a 14:10. And my final time trial around the park last year prior to the City to Surf was only a 14:00. My guess is I’ll go under 14 minutes the next time I run the course (for the first time since 2010), and that will be before June.

Things are looking up, at least compared to last year. I’m still not convinced I’m on track to “beat my age” in the City to Surf, but it’s definitely a possibility. Last year, when I was a year younger, I knew I was no chance. At least I have something realistic to focus on this year.

Today’s photo from the world run gives readers a bit of an insight into some of the views I observed on the side of the world’s roads. These are wildflowers in a forest on New Zealand’s North Island, between Rotorua and Tauranga. 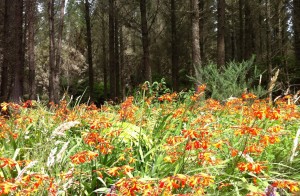 I ended with a relatively short day, then we headed back to Denver by car. This is part of a planned logistics and rest break. We have several things to get organised, so I am not planning on being back on the road for a few days yet. I am not injured, tired, or burned out – in fact, my legs felt fantastic today and I would like to have run 20 km more. However, I am going to stick to the plan, as in past years I’ve pushed myself till something breaks – I can’t afford to do that on this run. So I’ll play it conservatively, especially as I’m so far ahead of schedule. I’m sure I’ll come up fresher than ever.

A most interesting day – one that could have been mildly disastrous, but it worked out well in the end.

I headed off in perfect conditions, with more cloudless skies and mild temps. Just beyond the town of Ihtiman, I was continuously passed by a convoy of about thirty horse and carts carrying gypsy families. It was one of the more unusual processions I’ve seen on this run.

A little later, I once again decided to take a risk and use the freeway, instead of the much longer and hillier side road. I even ran through a 600 metre long tunnel on the freeway, with no problems.

Not long after that, I reached a road that Google Maps had instructed me to use. Carmel, Deb, and Barry were just behind in the car. Unfortunately, it was one of those almost non-existent roads – way too bad for the car to travel on. I had to call them and tell them to turn around and find a way to meet me at the other end. I’m glad I did, as the road got much worse, eventually disappearing altogether. I had to walk through long grass and scrub, using the blue dot on Google Maps to make sure I “kept on” the imaginary road. Luckily, it did meet a more substantive dirt road, which eventually became the road I was expecting.

The rest of the day was very picturesque, but without incident. The support crew met me with some lunch soon after. They’d had a very tough time getting the GPS to direct them to where I was heading. It kept wanting them to go up the dirt road again.

Later, Barry ran the last 10 km with me and, once again, the latter part of the day passed by quickly.