I’ve kicked this week off with a solid 37 km this morning. I only have six weeks of training before the Big Red Run, so I really have to get serious. At the end of next week I’ll be doing a 50+ km run and upping it after that. Just to remind readers, the event is a 250 km race over six days, starting and finishing at the town of Birdsville, and running through the Simpson Desert.

Last week I totalled 110 km, which wasn’t too bad given it did not entail a long run. I would have done one on Monday, but I didn’t have time because of my ABC TV interview that day.

Speaking of running in deserts, this photo was taken in the southern Californian desert as I ran past the Salton Sea during my world run. You can see the sea (in reality, a big lake) in the background. It’s the second lowest point in North America, only a few tens of metres higher than Death Valley, and well below sea level. 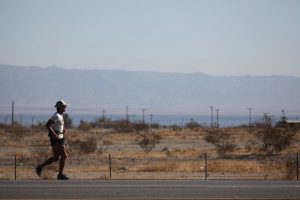