The date for the release of my book about the world run has now been brought forward even further. It will be in the books stores in Australia on Wednesday, June 24. The publishers are planning for a bit of publicity around the occasion, so it should be an interesting time.

Today’s photo is from Arizona, to the east of the unusually named Tuba City. These rock formations looked just like giant elephant feet. They were situated just metres off the road. I was regularly surprised at the strange sights like this that I’d encounter when running through the desert. 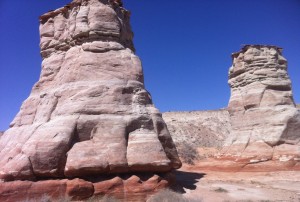