It’s where I sensed the tear occurred at the time, but there was too much overall soreness to be sure. I can feel a lump and some pain in that spot now when I push on it with my fingers. But now I know where to massage the scar tissue. It makes sense that the tear occurred in an unusual muscle because it happened due to my right leg trying to stabilise my body as my left ankle rolled.

Anyhow, I managed 95 km this week, which is pretty good. And today I even threw in a little bit of faster stuff, without it impacting on the tear at all. Things are looking up.

Now to something different. During the latter days of my run around the world, as I was in the middle of the Nullarbor and running along a particularly straight stretch where I could see kilometres ahead, I noticed what looked like a dog in the middle of the road and a guy standing behind (there was no traffic for at least 15 minutes). As I got closer I realised it wasn’t a dog. It turned out to be a goat.

I ended up chatting with the goat’s carer, Jimbo, for quite a while, with the goat, Gary, happily wandering around on the road. Jimbo was a travelling comedian, and Gary was his sidekick. Sadly, Gary died a couple of days. I was amazed to hear he had 1.7 million Facebook followers – surely a world record for a goat. At least Gary had a very interesting life – and not only for a goat. His life was more interesting than that of a lot humans.

This photo was taken on the Pampas in Argentina. You can see how flat the region is, allowing for very straight roads as well. But you can also see how there was absolutely no shoulder on the road, making it necessary to run in the grass whenever traffic approached from either direction. The grass wasn’t too long here, but it was in other places, and there were rattle snakes in the grass. I feel I got lucky in not treading on one. 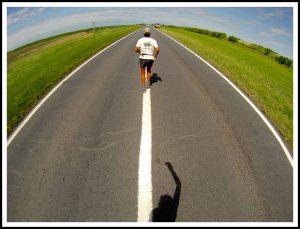