Just finished a 20 km run. My hip wasn’t too bad, although it tends to fatigue the further I run. The result was I was shuffling a little toward the end of today’s run. But I’m managing to put in decent distances. Last week I totalled 110 km, my longest week in more than two months.

The Icarus Ultrafest was held this past week in Fort Lauderdale, Florida. Last year I won the 12 hour race, my first ever international ultra marathon win. On that occasion it was run in 30 C heat and 96% humidity. Apparently the conditions were much more conducive this year, with significantly lower temperatures and humidity. In fact, I was told the conditions were as ideal as you could get. Wow, how I wish I’d run the race this year and not last. But that’s the luck of the draw. Everyone had to endure the same oppressive conditions last year, so I can’t complain.

Following on from the photo from two days ago, here is another photo taken that same day, although about 50 km further down the road. Pretty much all you can see in the background here is part of South Park County in Colorado. There isn’t much there other than farming land and ranches. Most towns are very small. Fairplay, the real life town of South Park fame, was the biggest I passed through. 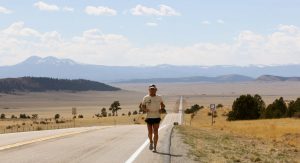