Hope you enjoy today’s world run memories. I was right in the middle of Argentina at this time in 2012. It was the flattest section of the whole journey, even flatter than the Nullarbor (which is not really all that flat).

This was one of the easiest days of running so far on the world run. It was imperceptibly downhill – so much so, that you could virtually refer to it as being “as flat as a …..” (Watto, a simile, please). The temperature was perfect, and the light cloud cover helped even further.

Amazingly, I saw a bird fall from the sky today and land about twenty metres in front of me on the road. It kicked one leg for a few seconds and then was dead. There was nothing else around, so I guess it died of a heart attack or some other natural cause. I’ve never seen a bird fall dead from the sly before.

I also had a fall, but it was my best fall yet. The four lane highway with tarmac shoulder has given way to two lanes with a hard packed dirt shoulder. I tripped on a wooden peg that was protruding about a centimetre from the dirt, and landed in a soft section of dirt – no scrapes or bruises of any kind.

I’m beginning to realise what a big country Argentina is. For those who aren’t aware, it’s the seventh largest country in the world by area. In comparison, Australia is the fifth largest. Argentina is approximately 3,600 km by 1,200 km. I’m crossing the narrow 1,200 km width. My friend, Tony Mangan, is currently running the 3,600 km length. He’s way down south now, approaching Tierra del Fuego.

Tomorrow will be more of the same. The countryside is one of flat farming terrain, and is very reminiscent of central New South Wales. As I said, it makes for very easy running.

The Day of the Snakes – an appropriate description for today. Besides several dead ones, I also saw three live snakes – two of which were aggressive toward me, and the other benign. All were quite small in size. I don’t know if this was how big they grow, or whether they were simply young.

The first snake I saw was early in the day. It was right next to the road, and looked like an adder or rattle snake of some sort (not sure if they have those in Argentina). It reared up at me and widened its neck like a cobra does. It then decided to slither on to the road. I tried to get it to continue on to the other side, but it insisted on sitting still in the middle of one of the traffic lanes. And, of course, along came a truck and ran right over it.

The second was in a similar position relative to the road. It had speckled black and white bands around its body. This one tried to scare me by widening its mouth to the full extent, like a python trying to swallow a pig. It then shook its head back and forth. It certainly looked scary to me. I left it alone, lest it slithered on to the road and met the same fate as the previous snake.

The third snake was golden brown in colour and was crawling across the road when I spied it. Its timing was impeccable, as cars just missed it on both sides. I got quite close to it as it slid off into the grass, but it didn’t seem intimidated by me – it actually seemed quite friendly, if that’s possible for a snake.

It was all a big wake up call, as I regularly run in the grass on the side of the road. I really don’t have any choice. I just hope they’re not poisonous, in case I’m ever bitten.

I am now running through the famous Argentinean pampas country – vast flat plains, mainly of grasslands and cattle ranging country. While I’m not actually in the state of Pampas, I’m only a short distance north of it. I’ve even seen some of the renowned gauchos – Argentinean cowboys on their horses.

For the past ten days, during which there have been no shops at all along the route, I’ve been having a mix of canned food for lunch. Carmel goes ahead and mixes it all up. It’s actually very tasty. Today we had what I consider may have been the most delicious lunch of the whole world run so far. It was a combination of tuna, lentils, peas, and a diced tomato, topped off with cracked black pepper. Seriously, it was a superb lunch.

As for the running today, it was more of the same, although the traffic was much lighter. I can’t complain. I’m feeling good and the running is easy. I could easily run further, but the hotel was right on the route, so it made sense to stop there, rather than have Carmel come and pick me up. And I can also start running from here tomorrow.

By the way, I’m now more than half way across South America. And the mosquitoes are getting bad too – the bites seem to itch more here than they do at home.

I used up a lot more energy today than I usually do running 50 km. Being the Monday of a long weekend, the traffic on the road was a lot heavier. This meant doing  a lot more running on the grassy shoulders. Lifting your feet out of ankle deep grass all day requires quite a bit more effort. So does turning around regularly to check the traffic coming from behind.

I generally run facing the traffic, but the lack of head-on traffic doesn’t mean I’m safe to run on the road. Because the highway I’m on has just one lane in each direction, and no passing lanes whatsoever, there is a constant stream of overtaking. If I’m not looking behind me, I run the very real risk of being hit from the rear at high speed. Consequently, I spend a lot of the time on the grass.

I have been on this highway since Mendoza, about 600 km ago. Through the states of Mendoza and San Luis, it was a four lane, divided highway, with a paved shoulder. However, through the state of Cordoba, the road has been just two lanes, as described above. I cross into a new state tomorrow, and I’m hoping the conditions improve.

On Friday night we met Mauro, his brother-in-law, and all their kids at dinner in Vicuna Mackenna. They were on their way to San Luis for the long weekend – a long trip from Buenos Aires. Today they passed us on their way home, stopping off to say hello. We’ve been invited to meet up again in Buenos Aires when I finish the South American leg. That will be a nice way to conclude this leg of the run.

I also passed some policemen doing highway patrol duty this morning. I’m sure they would have caught heaps of speeders on this Monday of a long weekend. They were very interested in my run, and we all paused to have photos taken together.

I have also discovered that Argentina has skunks. They smell the same as North American skunks, although they are a dark chocolate brown and white, rather than black and white.

So, all in all, a productive day, with the negative of heavy traffic being balanced by the positive of great weather. It has not been too hot at all, which is a pleasure after the US summer I had to endure. 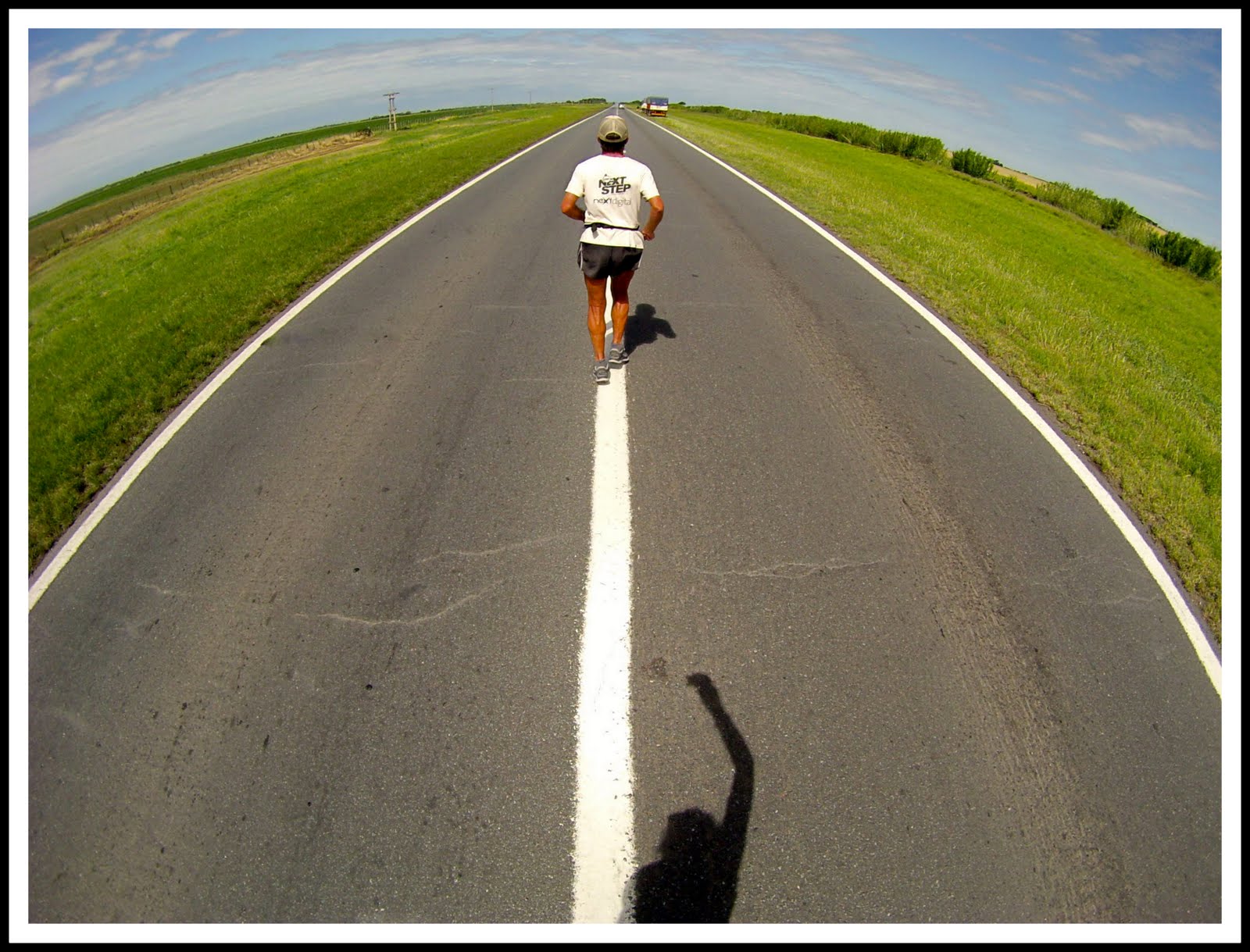 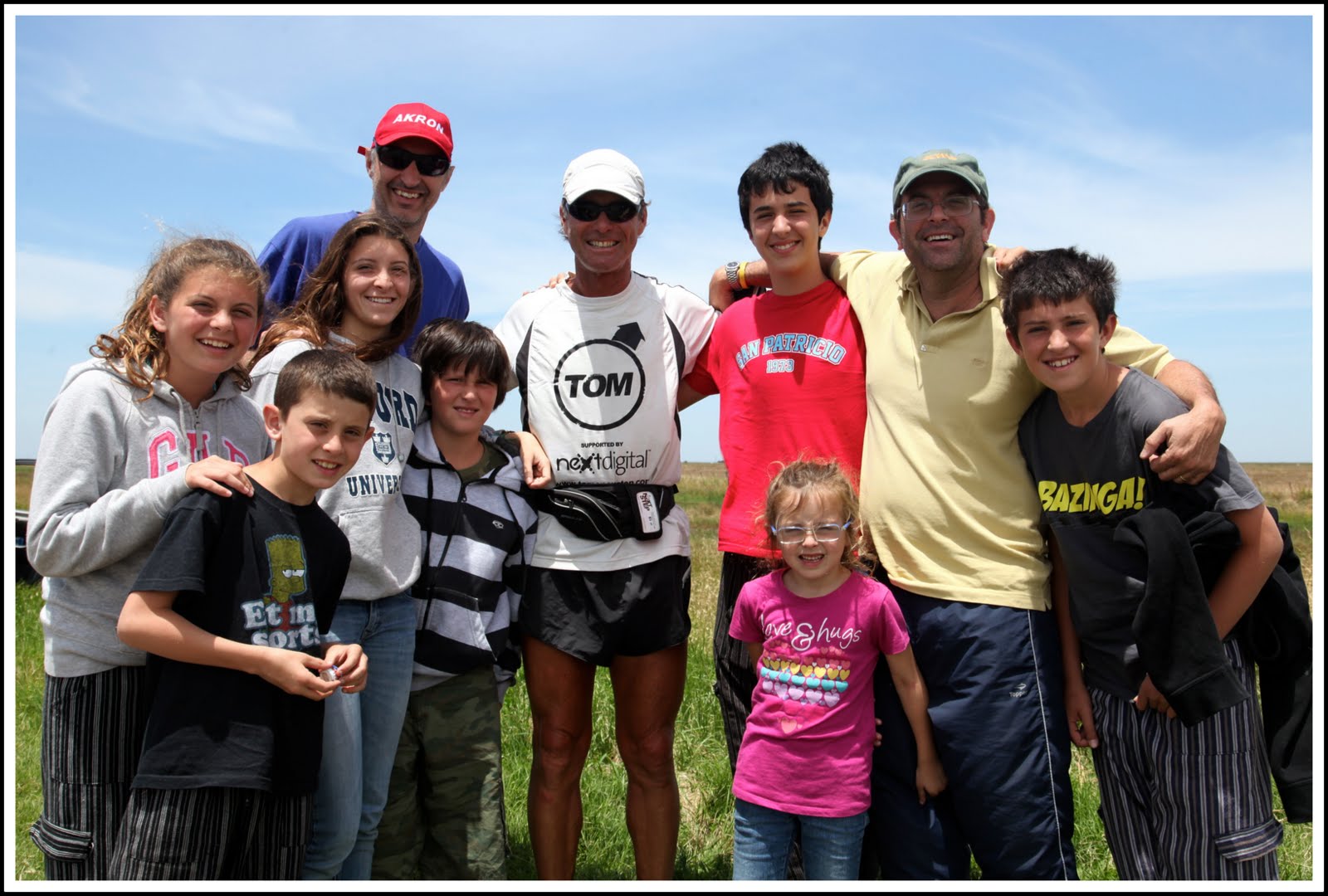 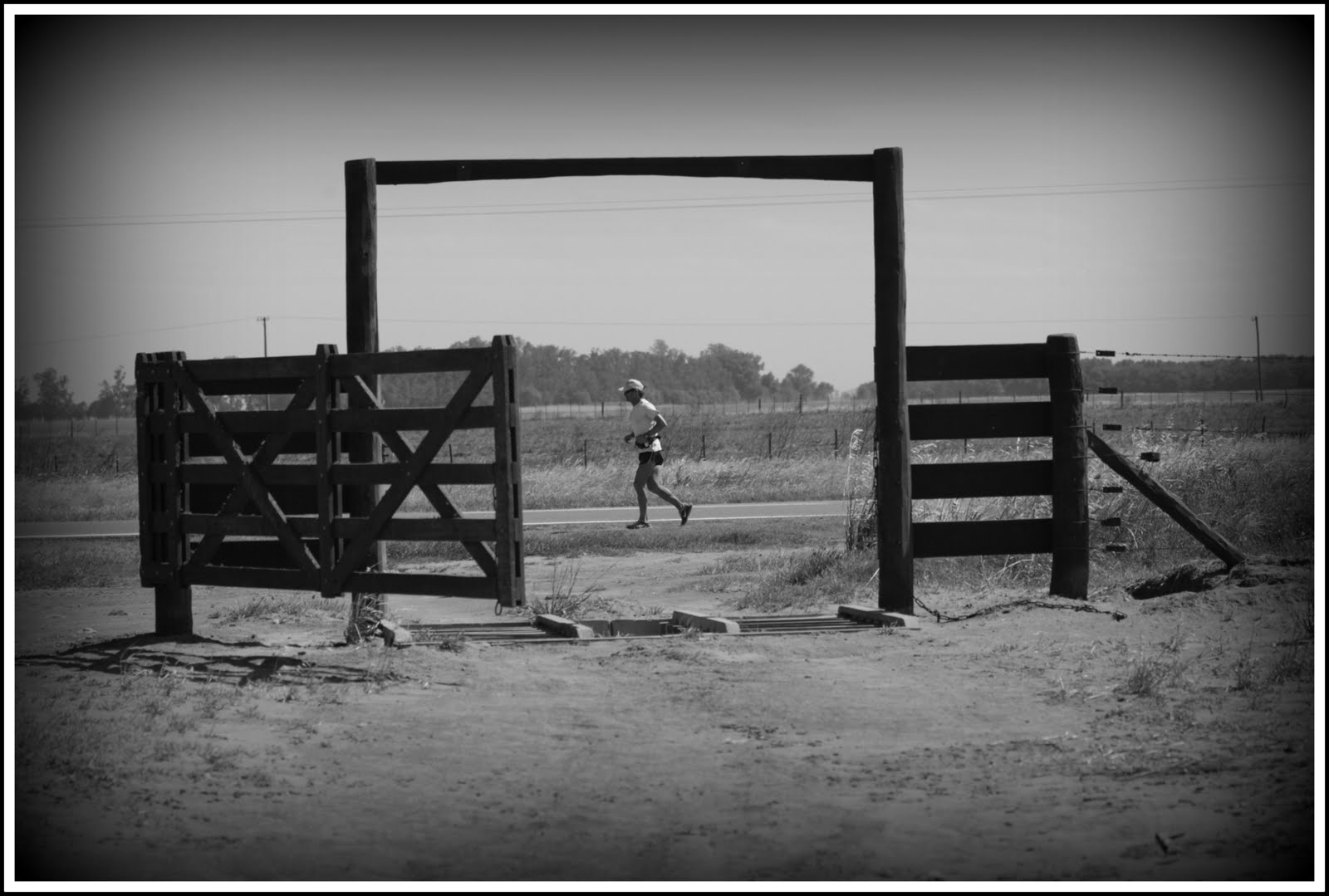