I’ve been really happy with how I’ve slotted back into the local time zone. Right from the very first night since returning from the US, I have slept for around eight hours between about 10 pm and 7 am, with roughly a total of an hour awake during that period. But that’s normal for me anyway. I’ve had no jet lag at all and have taken no sleeping tablets. It’s the best I’ve ever recovered from a long haul flight.

One final revisit of the race from last week (by the way, I’m writing this precisely one week to the minute from when I finished the race). My troubles at the end were totally related to a lack of eating during the race. I was so concerned about dehydration from the heat and humidity, I made sure I drank heaps. Pretty much a half a cup of fluids every lap. That means about 50 full cups, which would have been about 15 litres during the race. I definitely wasn’t dehydrated.

And I suffered no cramps or muscle fatigue at all, so there was no issues with electrolytes – my two litres of milk in the 12 hours prior to the race saw to that. However, all I ate during the whole race was a small breakfast burrito that was on offer – probably less than 100 grams in total. I ate that at about the nine hour mark. I just didn’t have an appetite, largely due to the heat. It was a lesson learned the hard way. If I’d fuelled myself properly, I’m sure I could have added another five or ten kilometres to my distance.

The photo below is of me crossing the finish line of the race. You can see how wet I am – a huge thunderstorm had hit not long before. You can also see how full my stomach is with fluid from those 15 litres I’d drunk. My eyes are closed, not so much with joy, as with exhaustion. 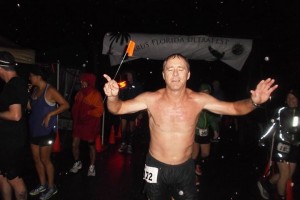